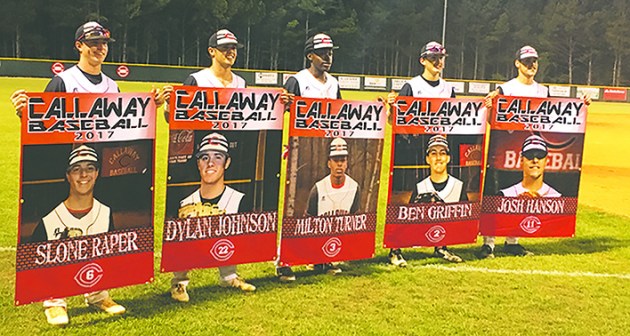 HOGANSVILLE – They’re his teammates, but to Callaway’s Slone Raper, they are so much more than that.

At the conclusion of Callaway’s final regular-season game, Raper and the other seniors on the team were recognized.

Although Raper has only been at Callaway for two seasons after transferring from Troup, he has formed a close bond with his fellow Cavalier seniors.

“It’s a brotherhood,” Raper said. “These five, it’s something I’ve never had in my life. They are truly my brothers. No matter what you ask, they’ll be there for you.”

Raper is hoping he’ll be able to share the field with his brothers for a few more weeks.

Callaway, after winning the Region 5-AA championship, will be at home today for the start of the Class AA state tournament.

Callaway’s opponent will be

They’ll play a doubleheader today at 3:30 p.m., with the if-game set for Saturday if necessary.

The Cavaliers, who are under the direction of veteran head coach Dusty Hubbard, are as hot as any Class AA team in the state.

After opening with a 5-7 record, Callaway won 16 consecutive games before falling to Morgan County in the regular-season finale.

The five seniors have had a lot to do with the Cavaliers’ success.

Raper, a first baseman, has had a big season at the plate with a .395 batting average, and he has driven in 29 runs.

Johnson, who has been starting since he was a freshman, is hitting .450 with 27 RBIs and 21 stolen bases, and he is also 5-3 on the pitcher’s mound.

Hanson, who plays the infield when he’s not pitching, is tied for the team lead in home runs.

For Johnson, facing playoff pressure is nothing new whether it’s on the baseball diamond or the football field.

Last fall, Johnson was the quarterback for a Callaway team that reached the semifinals of the state playoffs.

In baseball, Johnson is a four-year starter, and he has been a part of three region-championship teams, as well as two teams that reached the quarterfinals of the state tournament.

Johnson is savoring his final moments as a member of the Callaway baseball program.

“It means a lot,” said Johnson, who is going to be play college baseball at West Georgia. “Just like football, they’re my brothers, not just my teammates. I’ve been playing with them my whole life. I’ve enjoyed every minute of it.”

When Johnson was a freshman, he was an outfielder on a team that made it to the elite eight and lost in three games to Cartersville.

“I was talking about it today, it seems like yesterday we were freshmen watching Colby (Freeman), and Chase (Freeman) and all those guys,” Johnson said.

Hanson exploded onto the scene last season when he became the ace of the staff, and he has been phenomenal as a senior with an unbeaten record.

“We just have to play to our potential every day, every game, every practice, and we’ll be fine,” Hanson said.

Griffin said his time at Callaway has been “indescribable.”

“You come here as an eighth-grader, and you’re scared,” said Griffin, a two-year starter in the outfield. “You come out here, and you automatically feel like family. You feel like everybody’s going to be on your butt, but you come out here and everybody’s family. It’s been like that since I first stepped on the field. Coach Hub has done a really good job. He’s really done a good job with us all. These are good ballplayers, but they’re better people.”

With the five seniors and a strong group of underclassmen, the Cavaliers appear poised to do some damage in the playoffs.

“I feel like when we’re on our best game, nobody can get in our way,” Johnson said.

WHAT: First round of Class AA state tournament

SCHEDULE: Callaway will host a doubleheader today at 3:30 p.m., with the if-game scheduled for Saturday