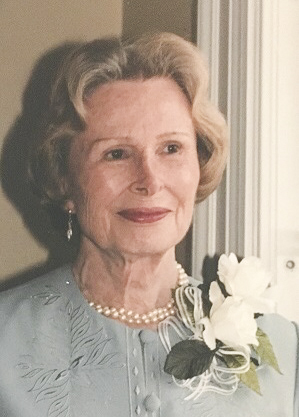 Virginia (Jenny) Borders Whitley, age 92, died peacefully on April 30, 2017,in Atlanta, GA. Jenny is survived by her daughter, Jerry Whitley Burgess, of Atlanta, GA; her grandchildren, Virginia Wynn Walter (Philip Walter) of Athens, GA, Courtney Joy Burgess of Atlanta, GA; her great-grandchildren, Whitley and Henry Walter. She is preceded in death by her husband, Grover Morgan Whitley, Sr. and her son, Whit Whitley, both of Atlanta, GA; her siblings, Homer Borders, Elizabeth Ballenger, and John Borders, all of LaGrange, GA. Virginia Borders Whitley was born on November 1, 1924 in LaGrange, GA, to parents Homer Bell Borders and Marion Wynn Borders.  She attended Auburn University where she was a member of Delta Zeta sorority and graduated in 1945 with a degree in Business Administration.  She and Grover moved to Atlanta in 1947 where they raised their two children. She worked for the Georgia Department of Labor for over 30 years where she served as head of her department. Virginia enjoyed playing golf at East Lake Country Club and the Atlanta Athletic Club where she was a member for over 50 years. She also enjoyed playing bridge, attending Auburn football games, hosting and attending various social events, doting on her grandchildren and great grandchildren, and shopping. Virginia also enjoyed a close relationship with her children as well as her siblings, their spouses, and her nieces and nephews. She will be remembered for her quick wit, vivacious spirit,  and her southern charm. Graveside services will be held  on Wednesday 5-3-2017 at 11:00 AM, at Shadowlawn Cemetery, LaGrange, GA. The Family will receive guests on Tuesday 5-02-2017 from 5:00 – 7:00 PM at A. S. Turner and Sons Funeral Home and Crematory Decatur, GA.  In lieu of flowers, donations may be made to Children’s Healthcare of Atlanta Foundation, 1577 N. E. Expressway, Suite A, Atlanta, GA 30329, Attn: Gift Processing.