Speakers show high schoolers the sales and marketing side of sports 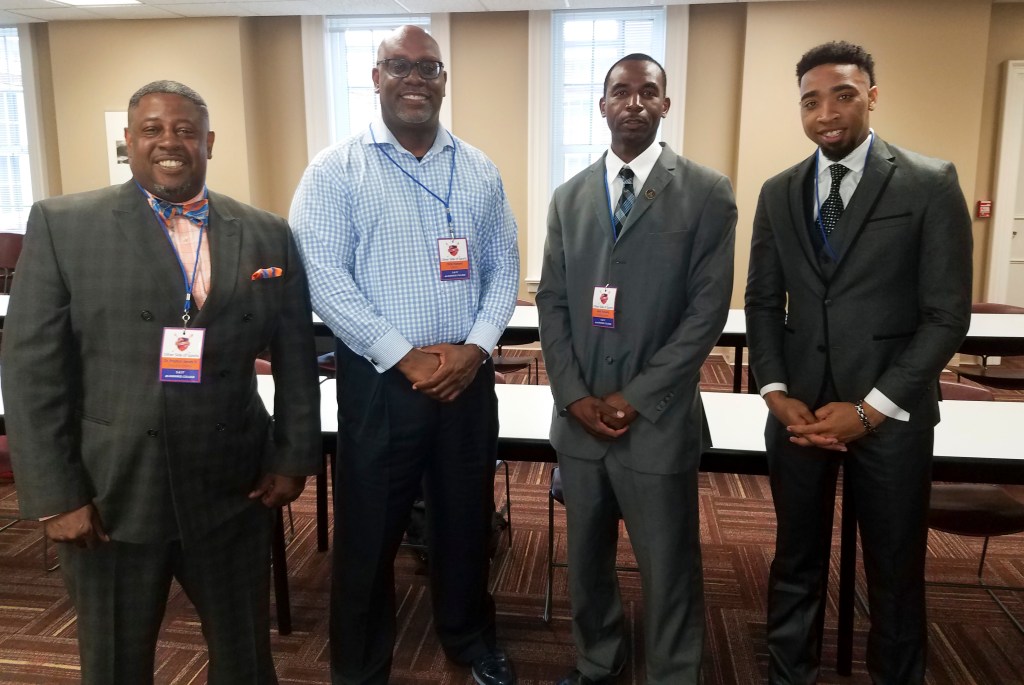 Speakers from the Other Side of Sports event at LaGrange College Thursday afternoon included, from left, Dr. Preston James, Executive Director of the Other Side of Sports & Assistant Professor of Sports Management & Business Law at LaGrange College, Chris Howard, NCAA Director of Enforcement for Football, Keith Roberts, Ticket Sales Manager for the Atlanta United and Aaron Johnson, Marketing Coordinator for the Detroit Pistons. (James Simpson II | LaGrange Daily News)

LaGRANGE- It’s fairly easy to imagine that most kids who grow up as sports fans, develop a pretty strong desire to become a professional athlete and set their mind solely on achieving just that.

However, do they ever ask themselves, “What if the plan to play professional sports doesn’t work out?”

Likely chances are at a young age; they haven’t even pondered the thought.

Well, the Other Side of Sports is here to help male youths with just that.

The Other Side of Sports is a program that is geared to exposing high school students with professionals in the sports industry to look at the different jobs within sports, as well as showing young men that there are numerous options in being involved with sports that doesn’t consist of actually playing sports.

On Thursday afternoon at LaGrange College, the Executive Director of the Other Side of Sports and Assistant Professor of Sports Management and Business Law at LaGrange College, Dr. Preston James, brought in professionals from all scopes of the sports industry to speak to a group of male student-athletes from LaGrange High School.

“I thought it was very important for the young men to be exposed to the business side of sports,” said Dr. James. “They all here about the playing side and there are too many kids that unrealistically think they can make it to the pros and that’s because they like sports. They think the only thing you can do is play and if that’s not an option, they can’t do anything. I think by showing them the many options out there, it will give them the exposure they need to shoot for whatever goals they would like to have.”

Each speaker got a chance to speak to different groups throughout the event about their career experiences, their journey of how they were able to navigate through the sports industry, and on the countless opportunities there are in sports, in case a playing career in the pros doesn’t materialize.

“It’s not about how talented you are but it’s about handling your business and succeeding in the classroom,” said Roberts, as he spoke to a group about the sales and promotions side of sports. “Someone once told me that the first thing you have to know about sports is that you have to work your way from the bottom to get to the top.”

Roberts explained his career path from starting with the Atlanta Hawks doing seasonal internships to working in community relations for four years for the Atlanta Braves to spending time as the sales and services lead for the minor league soccer team Atlanta Silverbacks to making the transition in sales working for the Atlanta Falcons for eight years to currently holding the title of Head of Ticket Sales Department for the new MLS team Atlanta United.

“Don’t let anyone tell you what you want to do in your career,” said Roberts. “You choose.”

Johnson, discussed the importance of networking, how essential it is to make a quality sales pitch and how presenting yourself the right way can go a long way in creating job opportunities in the near future.

“You want to make sure you have everything in order when you present yourself to someone,” said Johnson. “Networking is an art and you have to go out of your way to make yourself known.”

When speaking to a group of students who all played football in high school, Howard broke down the chances of them becoming an NFL player to becoming the Commissioner of the most popular league in all of sports.

“How much do you think Tom Brady makes a year?” asked Howard.

“He made $764,705 this year,” said Howard, to mostly everyone’s surprise who thought he made a lot more.

“How much do you think Matt Ryan makes per year,” asked Howard.

“He made $15 million last year,” said a student after he looked it up on his phone.

After those two questions were answered, Howard then asked, “How much do you think Roger Goodell makes in a year?”

“The most Roger Goodell made in a year is $44 million,” said Howard, stressing that you can make it behind the scenes in sports and make a lot of money too, even if you don’t have the athletic ability to make it to the pro level.

“The point is that players like Tom Brady and Matt Ryan are both great football players but the reality is that the commissioner of the league makes more money than those guys,” said Howard, as he challenged each student to start forming a plan as to what college they want to attend. “If you work at it and stay focused in the classroom, then you could be Roger Goodell.”