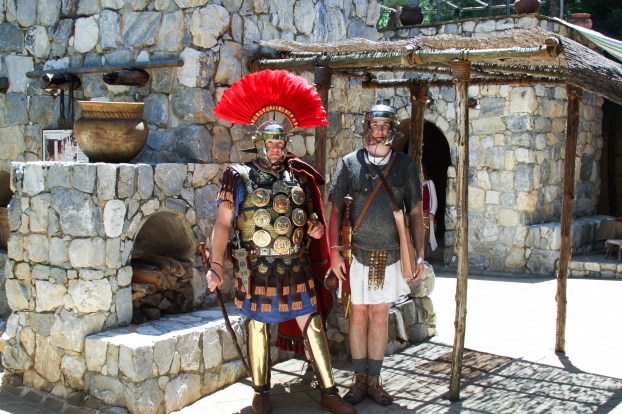 LaGRANGE – Visitors to the Biblical History Center may have felt like they had stepped back in time to Roman occupied Judea on Saturday as the museum hosted its sixth annual Roman Army Day.

The event featured a group of Roman soldier re-enactors from the group Legio XI who put on performances and interacted with guests along with the full staff of docents and volunteers from the center in the style of clothing that would have been worn during that time period. Between the market place, bread baking in a shepherd tent, weaving and lessons on a game that would have been popular 2,000 years ago, it would have been difficult not to have found something to inspire the interest of any visitor to the event, but the most eye-catching feature of all were the Roman soldiers that patrolled the stone streets within the museum.

“This is living it (history), and they can actually talk to Roman soldiers,” said Chief Operating Officer Dr. Derrick Lewis. “These guys really study this – how life was for Roman soldiers – and they really understand it, so they can really tell you about it. They make their own gear, and it is just an amazing experience for kids and adults.”

Organizers estimate that over 500 people attended this year’s event.

“It’s an amazing site,” said Rusty Myers who attends re-enactments across the southeast as a centurion. “They’ve packed so much into such a small area. It blows my mind, and we love the pictures we get here.”

Myers commented that he loves how the pictures of their troop at the museum appear to be 2000 years old, and the site itself is one of the group’s favorite locations to visit because of the artifacts and other re-enactments that lend an air of historic age to the location. One of the additions to this year’s event was a playable game that visitors could play in much the same way that Romans and Israelites would have in ancient times.

“Sometimes when you study the ancient world, you are shocked that people were able to live as primitively as we think without Google or running water, however the game boards are proof that people actually lived,” said Curator Morgan Cantrell who helped organize this year’s event. “They enjoyed their lives rather than simply surviving from day to day.”

The game called “senet” originated in Egypt, but was commonly played throughout the Roman empire by the time of the Roman occupation of Judea.

Roman Army Day is on the first Saturday in May every year. The next major event at the center will be its 10th annual National Holocaust Remembrance Observation on May 28 at 5 p.m. To learn more about the Biblical History Center visit biblicalhistorycenter.com or call 706-885-0363.

To learn more about the Roman soldiers who appeared at the museum visit legvi.com

LaGRANGE – Pyne Road Park was packed with cars and onlookers on Saturday, as the sheriff held his eigth annual... read more