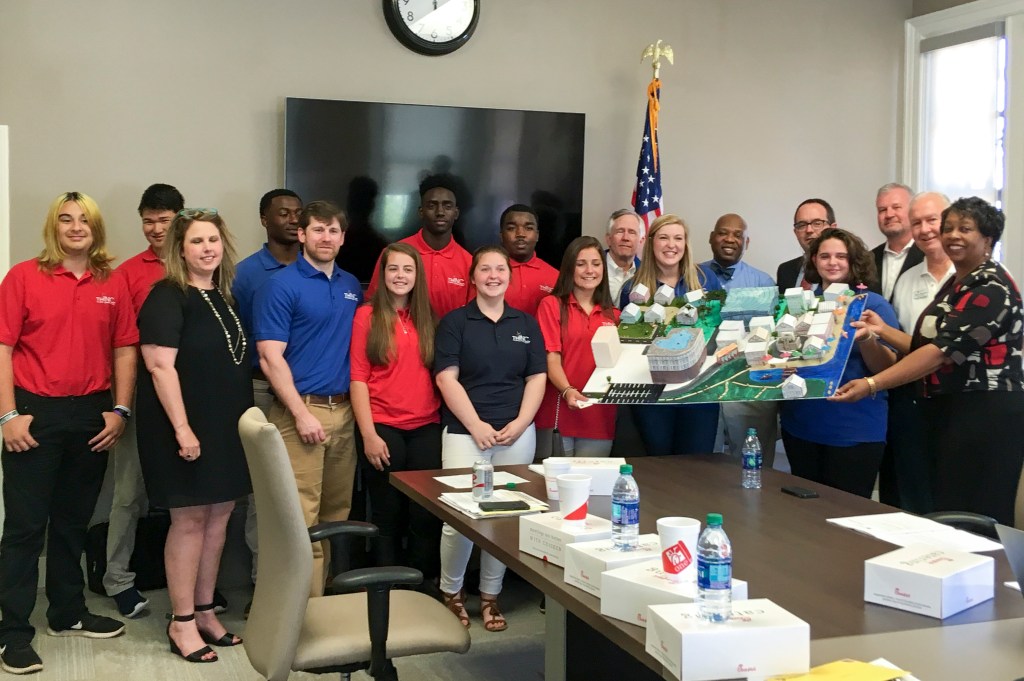 Students from THINC Academy presented the results of their semester long project on how to keep 18 to 35 year olds in the community to the LaGrange City Council on Tuesday. (Photo by Alicia B. Hill | LaGrange Daily News)

LaGRANGE – Students from THINC College and Career Academy in LaGrange presented the result of months of hard work to the LaGrange City Council on Tuesday, and while the project that the students proposed was purely speculative, the council was interested to hear a new set of ideas on how to solve a question that has been asked throughout the county for years.

Because of THINC’s focus on preparing students for college and the workforce, the academy tends to favor hands-on learning with direct, visible connections to the real world. But this is the first year that a class has worked on a project such as this, where students have spent an entire semester creating and reviewing responses to surveys, making plans based of survey results and putting together a community plan for how those results can be implemented. The topic of all those questions and hard work was a goal that has been a major talking point among government and chamber of commerce officials for years: How can LaGrange convince young adults to live here?

“They had taken on the assignment of what could make LaGrange more appealing to young adults –the focus was 18 to 35 – and so they had a competition internally, and I understand that they had a winner of the competition,” said Mayor Jim Thornton. “But then they also came back and worked collaboratively to adjust beyond even that, and it is a really impressive group of students.”

The final plan – which took into consideration the feedback from all four student group projects – recommended creating a lakeside community with housing, shopping, outdoor activities – like fishing and jet skiing – and indoor activities – like bowling and laser tag – as well as live music. This recommendation was the result of a series of surveys of local college students and young adults, many of whom admitted to going out of town for activities on weekends.

The students agreed on the lake location when they saw that the majority of survey respondents did not believe that the lake was being fully utilized.

The class zeroed in on Willowcrest Cove as a possible location for the project, because of its location near the city and Highland Marina. Also, this area is owned by only two groups, which could make obtaining the land easier if the project is actually pursued and the landowners were agreeable.

“The thing that I really like about this project is that I’m in this age group,” said Aiden Blackwell, an instructor with THINC. “I’m 32. I’m not from LaGrange. I’m from North Alabama, and I came here because I started teaching at LaGrange High School in 2007, and really since the year that I moved to LaGrange I’ve been looking to go away from it because I’m not from here. I have no attachments, so this question of how can we make LaGrange more appealing to 18 to 35 year olds really hits home for me. This project is heavily based of data collected from college students, but I took every survey that they made because it is important for me.”

The student project focused heavily on what might attract young people to live in LaGrange over the financial concerns and logistics that would be necessary to make a plan such as this. By the end of the presentation, however,  the council found themselves with food for thought. Maybe in a few years that food could even be beside West Point Lake.

To learn more about THINC College and Career Academy visit thincacademy.net or call 706-668-6800.

The Young Gamechangers plan to present the findings of their own research on similar projects, including attracting millennials, hidden tourist attractions and going green on June 2 at Del’avant from 2 to 4 p.m. The event is free, but Georgia Forward requests RSVPs at georgiaforward.org/young-gamechangers.