Group crafts mats for the homeless 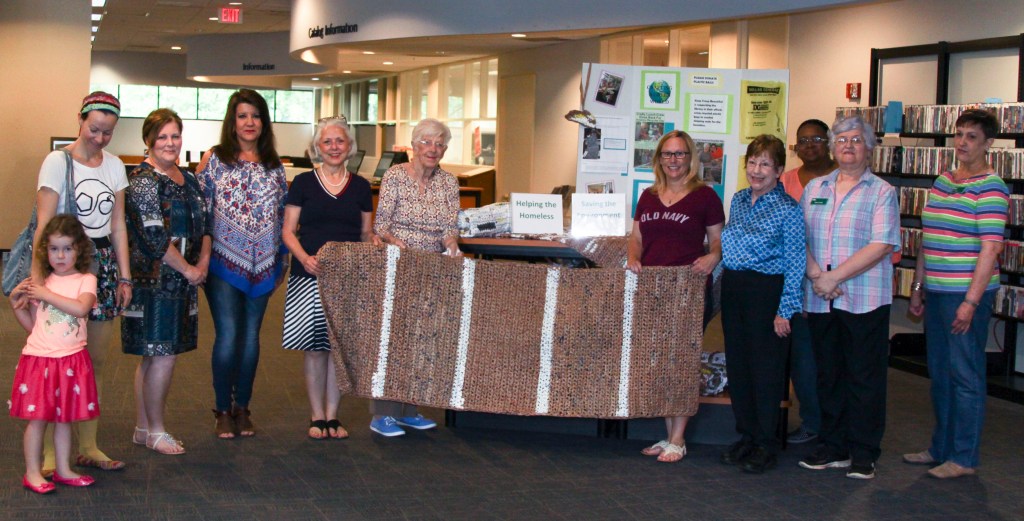 A LaGrange Memorial Library craft group donated seven mats that they created using plastic bags and a crochet technique to the Homeless Coalition on Friday. (Photo by Alicia B. Hill | LaGrange Daily News)

LaGRANGE – After months of work, a group of dedicated crafters presented the mats that they had created using plastic bags woven together using a crochet technique.

According to the group, it took about 700 bags and several weeks to create each of the 7 mats that they donated to the Homeless Coalition who assists locals struggling with homelessness throughout the year, even when facilities like the warming center are closed. It is with that closing that the need for better bedding materials to help people sleep as comfortably and cleanly as possible becomes especially apparent.

“In our homeless community, we have some that – after the warming center is closed down, and we get ready for the spring and summer – we have several individuals who we are still in contact with under bridges and in different places, in abandoned houses and different things,” said Denna’ Muncy of the Homeless Coalition.

In recent years, LaGrange residents have begun to make more coordinated efforts to help the city’s homeless population through the work of various churches, food programs and labor assistance programs, and this effort by LaGrange Memorial Library regulars aimed to provide help in one of the areas where they could see that help was still needed.

“In the beginning, I think it was a disbelief that we had homelessness inside Troup County, and a lot of people didn’t recognize it because we’re not a classic case where they are dirty individuals,” said Muncy. “It is not what you see in the movies. They look just like us. … They are clean. They are presentable. They are able to get work. They just don’t have enough money to move to that next step.”

The group hopes that the mats will give some of LaGrange’s less fortunate residents something clean and dry to sleep on, and since the mats are easily washable, the hope is that they may even help people who have chronic conditions like diabetes that could be exasperated by sleeping on the ground.

“This idea, people have been doing it all over the world – in Africa and the Philippines – where they take trash – and Latin America – and they take trash and they turn it into something that they can make an income with and contribute,” said Heather Bostick, who first suggested that the group create the mats.

For the entire group, it was a labor of love and an effort to make our community a better place.

“I hope that the folks who use these will know that they were made with love and care and concern and hope – full of hope,” said Katherine Adams from the LaGrange Memorial Library.

Several members of the group from the library who created the seven mats that were donated on Friday, conveyed plans to continue making mats on their own to donate to the Homeless Coalition in the future.