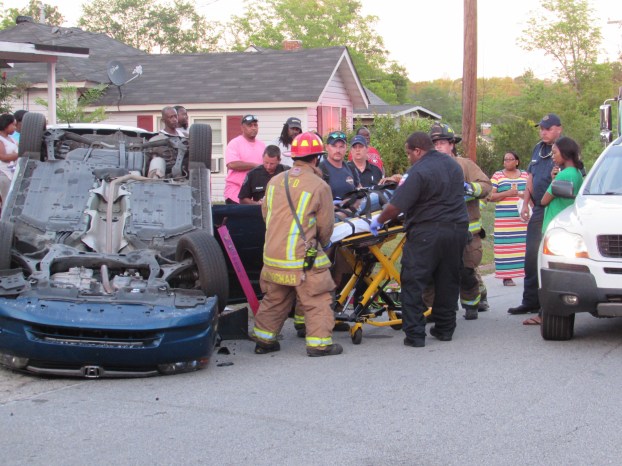 First responders rush the victim to a waiting ambulance on Colquitt Street. The woman was driving a Honda sedan when it was hit by a Volvo SUV and flipped over. LaGrange police said parties in both cars may have been in a feud before the wreck.  (Photo by: Melanie Ruberti | Daily News)

A feud between a woman and one man may have been the cause of a two car collision just after 8 p.m. on Monday in the 400 block of Colquitt Street.

LaGrange police officers on the scene said the driver of a white, Volvo SUV hit a blue Honda sedan. The sedan ran up an embankment and flipped upside down in the front yard of a home, officers said.

The driver was briefly trapped inside the car, extricated by LaGrange firefighters and taken by ambulance to a nearby hospital, police said.

The victim complained of leg pain, but officers were unsure of her injuries as of press time on Monday.

The alleged driver of the Volvo, a young man, was taken into custody by LaGrange Police.

Officers did not know if the man would face any charges.

LaGrange police said there was possibly a fight between parties in each car shortly before the accident.

Officers were interviewing several passengers who were inside the vehicles and people who witnessed the wreck.