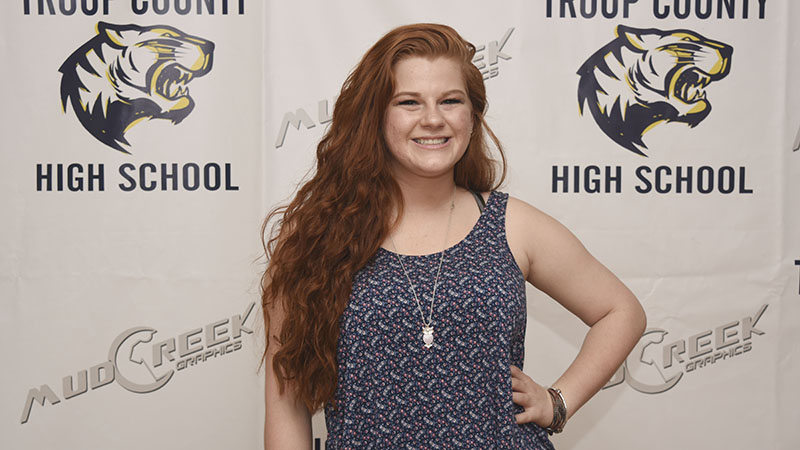 Troup County High School valedictorian Kiara Thompson poses for a photo at the school on Wednesday afternoon. Thompson has already taken a year and a half of college classes. --Daniel Evans

Before she starts her speech during graduation, Troup County High School valedictorian Kiara Thompson might have to reintroduce herself to her classmates. It’s been a while since they’ve seen her, so they might not recognize her.

Thompson had only one required high school class left this year, and she was able to take it at Columbus State University, so her time at Troup County High School has been limited. She’s only made a handful of trips to the school during the 2016-2017 school year.

Most of her time has been spent at Columbus State, where she’s already earned a year and half worth of college credits.

“I feel like a lot of people don’t know who I am,” Thompson said with a laugh. “I feel like when I was announced as valedictorian, everyone was like ‘who is that? Does she even go here?’ But I have a lot of friends in this graduating class and I had a lot of friends in the previous graduating class, just because I had more classes with them than people I’ll actually graduate with.”

Soon, everyone may know her name.

Thompson plans to be a politician, with a focus on one day working within Congress, or even running for governor one day.

Thompson was born in Albany, Georgia but spent 12 years in Maryland, where she attended a charter school. She started taking high school classes in middle school. When most students were taking sixth grade math, she took pre-algebra. She also took Algebra I, Geometry, English I and Spanish I in middle school.

By the time she finished her junior year, she needed only more class to officially graduate high school. She took that English class this spring at Columbus State.

“It does mean a lot to me, but I feel kind of bad,” Thompson said of earning the title of valedictorian. “I don’t feel like I’m the smartest person here by any means. I think I just took a lot of extra classes and I did put in a lot of hard work, but there are other people here that deserve it more than me.”

Thompson’s classmates probably disagree. In previous years, when she was at the school regularly, she was a member of the Spanish Club, Illustrators Club, National Honors Society, INTERACT and Skills USA. In the free time she does have, she likes to play guitar and Google conspiracy theories. Her parents are Chris Thompson and Michelle Thompson.

Thompson, who has a 4.5 GPA, earned the Zell Miller Scholarship and will attend the University of Georgia starting in the fall.

During her valedictorian speech, she plans to talk about everything she learned during her time in high school. Thompson has dealt with her own stresses, but has shown the ability to persevere.

“You don’t just learn the quadratic formula or how meiosis works,” she said. “You learn life lessons and I’m going to talk about some of the life lessons I’ve learned since I’ve been in high school.”