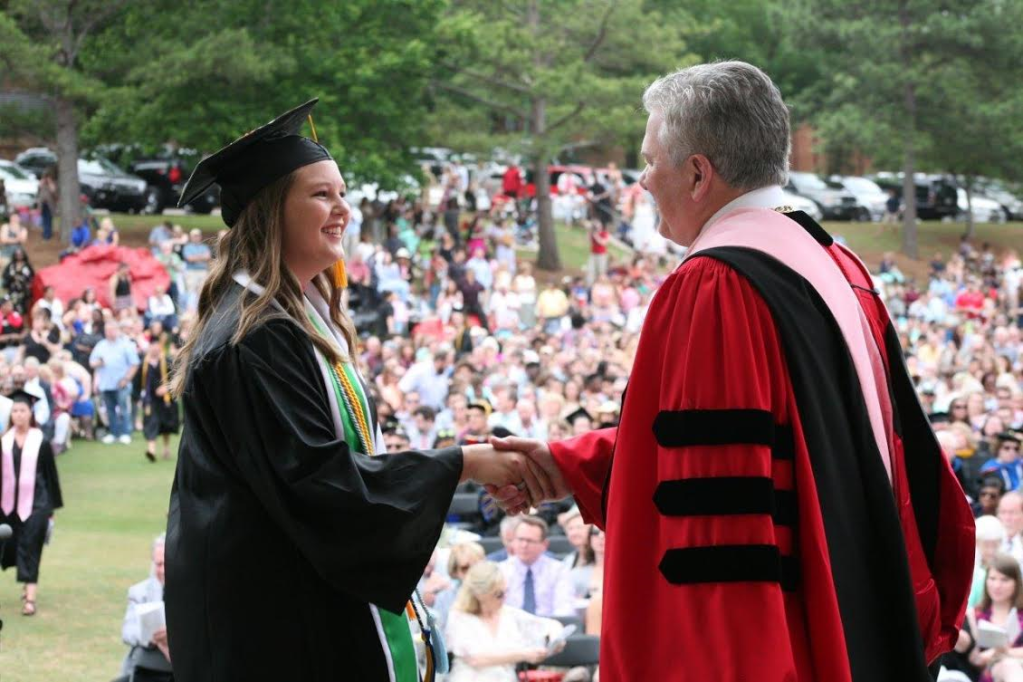 The college’s Class of 2017 was urged to become “ambassadors of kindness” during commencement exercises May 20 on the Residential Quad.

Judge Richard W. Story ’75, U.S. District Court judge for the Northern District of Georgia, was the speaker for the college’s 186th graduation ceremonies where approximately 260 students received their diplomas. In his address, he encouraged graduates to choose to be kind.

“The sad truth is that we have lost our sense of civility,” he said. “We can no longer engage in meaningful discussions about substantive issues without having those discussions descend into bitter, personal attacks. We have lost the ability to listen to one another with an open mind, and are unwilling to consider that we could possibly be wrong about a matter.”

Story said our dependence on digital communication has robbed us of the ability to meaningfully connect with each other.

“We don’t see the people with whom we are communicating or hear the inflections in their voices,” he said. “Thus, much of the emotion is missing.”

There is no magic solution to the problem, he said, but each of us has the power to make a difference, one person at a time.

“At the expense of being profoundly simplistic, I suggest to you that the early 20th-century author and critic, Henry James, offers a good point from which to begin. He said, ‘Three things in human life are important: the first is to be kind; the second is to be kind; and the third is to be kind.’”

He urged the graduates to find opportunities for kindness in everyday encounters with others.

“Exhibiting genuine compassion for others can be transforming for us, as well as for those around us,” he said. “We do not always have to agree. But if we can convey a respect for a differing view, then we can begin to turn down the heat and build relationships, not destroy them.”

He told the students they have been equipped by their time on the Hill to accept his challenge.

“You have received an education here that not only challenged your minds but inspired your souls,” he said. “You have been uniquely prepared to be an agent for change, to be servant leaders.

“So graduates, my charge to you is so, so simple,” he concluded. “Be kind.”

President Dan McAlexander praised the graduates for their work, sacrifice and perseverance that got them to this point in their lives.

“Always search for truth,” he said, “and take with you the values of civility, diversity, service and excellence that you learned here.”

Senior Asti White presented McAlexander with a check for $1,300, the result of the annual Senior Giveback Challenge, remarking that this year’s participation rate of 65 percent set a new college record.

“Through my fraternity, Pi Kappa Phi, I discovered my passion for service,” he said. “I rode my bike from California to Washington, D.C., as part of Pi Kappa Phi’s philanthropy work, and developed a strength and determination to help me succeed.”

As a chemistry major, Hank said he’s thrilled with the new Hudson Callaway Hudson Lab Sciences Building and grateful for his time as a Servant Scholar. But he said he believes his greatest accomplishments still lie ahead of him.

“Will Smith has said that God has placed the best things in life on the other side of terror,” he said. “I urge you all to stand strong in the face of great fear and remember what it is to be a Panther.”

The Distinguished Service Alumni Award was presented to Nancy Mitchell Morris ’60. She paid homage to a person she never met but never forgot.

“Stella Bradfield was a professor at this college and established a scholarship when she retired,” she said. “I received that scholarship when I was a freshman. Without it, I would have never been able to attend my first choice, LaGrange College.”

After losing her husband and son within four months of each other, Morris dealt with her grief by setting up scholarships in their memory. She encouraged graduates to find ways to stay connected to the college and to give back when possible.

“I hope you will become a Mrs. Bradfield for another promising student.”

Businesswoman Janet Mabry Gipson Caswell ’66 was presented an honorary doctorate for her work with and support of the college. She described herself was “the world’s oldest cheerleader.”

“Well, at least the oldest LaGrange College cheerleader,” she said with a laugh.

She said she found her “perfect place” at LaGrange.

She shared how she and her late husband, Sam Gipson, built a career as entrepreneurs and strived to live with integrity in every part of their lives.

Through her work with the college, she said she has seen firsthand how much everyone at LaGrange is committed to every student.

“You will never be supported or loved more than you are here,” she said. “Find a way to stay connected because this place deserves your support.”

Seniors tee off during ‘Golden Olympics’