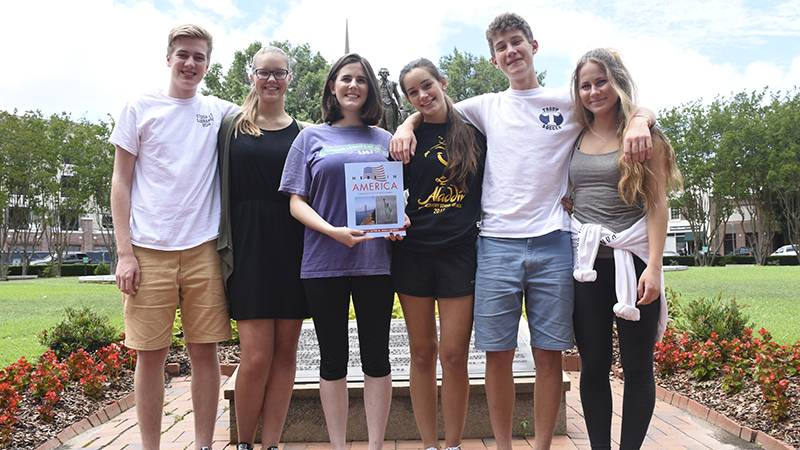 Anders Laurents won’t forget the first American football game he ever went to. Laurents, a foreign exchange student, said there’s nothing in his home country of Denmark that can compare to the atmosphere of American sports, so when he had a chance to go to an Auburn game, he was surprised by the size of the stadium and the crowd.

“I’ve always been into sports, and I guess sports is a really big thing here. I wanted to try the American school spirit because we don’t really have a school spirit in Denmark,” Laurents said.

Laurents is one of eight students who are taking part in the 10-month Nacel Open Door program. Nacel is a nonprofit organization that promotes international understanding and language education and oversees exchange students in 22 different states. This year’s students in LaGrange were from five different countries — Norway, Italy, Germany, Denmark and the Czech Republic.

The students arrived in August and went through the school year, but now their time is winding down. Over the next few weeks, all of them will be heading home.

“I think I’ve become more open. It’s easier to go talk to strangers so when I go home, and I start a new school, I’m going to be way more open,” Laurents said.

The students have had a chance to try all kinds of American experiences, including trips around the country, American high school classes and of course, American food.

“There’s definitely a lot more choices. We have Burger King and McDonalds and that’s it,” said Anna Pernille Brovoli, a student from Norway.

“It’s been a good experience, but I’m looking forward to going home and eating healthy again. I feel a little unhealthy here.”

Laurents said in LaGrange everyone uses their car to get around, but in Denmark, everyone either walks or takes a bus.

“In Denmark, you can walk or take the train or the bus everywhere,” Laurents said. “You just depend on your legs basically. You just walk.”

Malte Koppermann, a German student, had a chance to travel with a group from Troup High School to President Donald Trump’s inauguration in Washington D.C. in January.

Koppermann still has two years left in high school in Germany, but he’s leaning toward a career in government.

“If possible here because in Germany it’s pretty boring,” Kopperman said with a laugh.

Each student applies to be part of the Nacel program and picks the country they want to go to. They do not get to pick the state they end up in, so it was by chance that these eight students were picked to be in LaGrange and not somewhere else.

Each student stays with a host family, which is screened by NOD representatives. The host families welcome students into their homes and provide room and board, but also take them in as if they are part of the family. Christiane Price is the coordinator of the Nacel Open Door program in Georgia.

Kopperman had a unique perspective during his time in LaGrange. His host family was Hispanic, so he attended First Hispanic Church of LaGrange, and had a chance to see America through a different culture.

He already knew German, English and French before coming to the United States, and now he’s also learned some Spanish as well.

“It’s great to be in a Hispanic family. It shows a different way to live in America,” Kopperman said.

Each of the host students will be returning to friends and family that they haven’t seen in nearly a year, but they also admit it’s going to be hard to leave.

They’ve made friends in America and they’ve grown tight with their host families.

“At the beginning, it’s going to be more sad because you are leaving people you know you are never going to see again. When you live with a family for 10 months, you know you are going to get really attached to them,” Brovoli said. “But once I get home I know I’m going to be happy to see everyone.”

“I kind of want to stay longer because it’s been a great experience,” Laurents said. “I’ve got so many friends and a family here, so you don’t really want to leave. I come back to friends and family too though, so I’m excited to see them again.”

Price said the program is still looking for families that can take in students for the summer.  Anyone interested can go online and apply to be a host family at www.nacelopendoor.org.