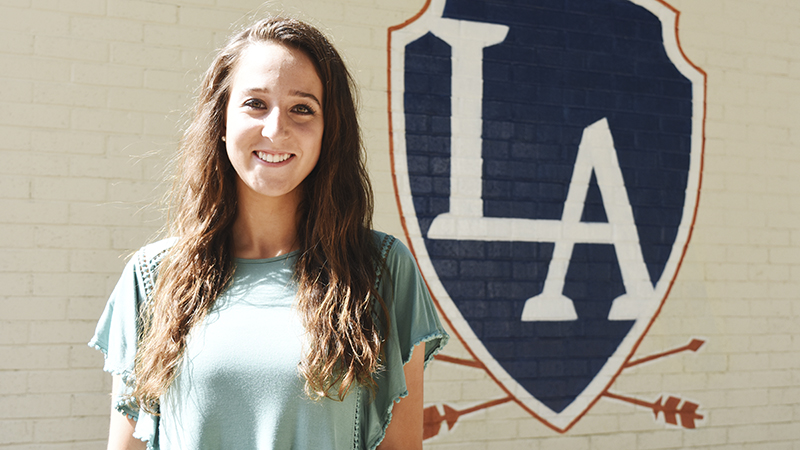 LaGrange Academy valedictorian Sydney Emerson poses for a photo on Thursday at the school.--Daniel Evans

Sydney Emerson remembers a lot of Friday nights where her friends would be out at the movies or the mall, and she’d be stuck in her room studying.

She had soccer tournaments on many of her weekends throughout the year, so Friday nights was one of the best times for her to get her homework done. Unfortunately, it meant declining a chance to hang out and do something fun.

“I had to give up a lot of things that a lot of people would consider normal for a high school,” Emerson said. “On a lot of Fridays, kids would be out at the movies or something but I would be studying for a big test, knowing I’d have to go out of state for the weekend for a soccer tournament.”

All of that hard work has paid off. Emerson was LaGrange Academy’s valedictorian for the 2016-2017 school year and she graduated with a GPA of 4.5. She made a 30 on the ACT and plans to attend Auburn University, where she will major in pre-dental.

Emerson made one of the toughest decisions of her young life last year, when she determined she’d likely have to give up soccer if she wanted to go into such a demanding field.

“A lot of Division I schools aren’t so big on doing pre-med and pre-dental, just because it’s so competitive at that level,” Emerson said. “You kind of have to choose between the two, and I realized that soccer wasn’t going to be my career. Ultimately, I just decided to stick with school. It was a tough decision.”

Emerson was in a unique position because she had both options. She scored seven goals in a game in March against Logansville Christian, which shows her talent on the field. However, as talented as she is athletically, she might be even better in the classroom.

She’s never made a “B” grade in any class and is determined to keep it that way as she heads off to Auburn. She’s received a partial scholarship from Auburn University, which will help pay for her tuition.

“I think the thing that distinguishes me from others is I have an obsession with hard work. I think that’s something that will help me in my college career and I think you’re going to have to have that if you go into a career in the medical field,” Emerson said.

“I know especially going to a school like this I grew up with pretty much my whole class,” Emerson said. “You spend 13 years with the same people, doing the same things at the same place. I feel like it’ll be good for me to experience different things, different people.”

Emerson’s parents are Lisa and Thavin Emerson, and she’s an only child. She said it’s going to be hard sharing a dorm with someone at Auburn, since she’s never had to experience that before.

“All of this is going to be so new to me, and I’m looking forward to it,” she said.

She said her parents have made so many sacrifices to help her reach this point in her life. She said on one weekend during her freshman year, they drove her all the way across state after a soccer tournament, just so she could go on a freshman biology field trip for LaGrange Academy.

“I wasn’t going to get to go, but the game ends that evening and my parents drive me all the way down there and then drive all the way back that night,” Emerson said. “They got back at like 4 in the morning and then went to work the next day. They had to sacrifice so much for me to have to play soccer.”