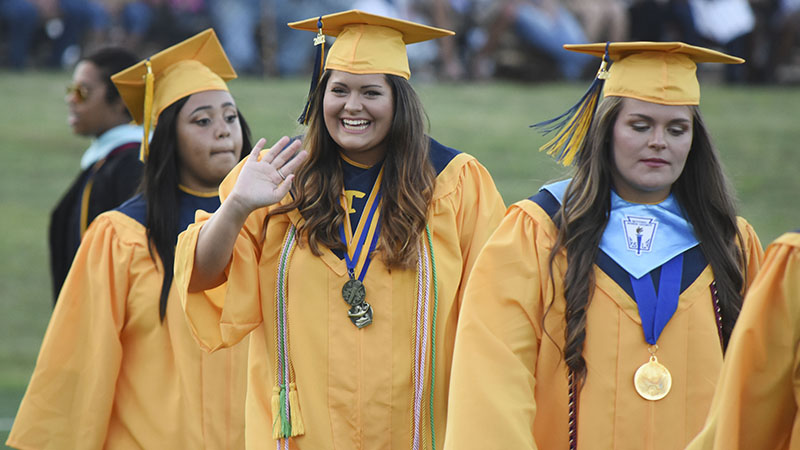 Maggie Makenna Johnson waves to family members in the crowd at the start of Friday’s graduation. --Daniel Evans

People were packed into just about every seat available at Callaway Stadium Friday night to cheer on the Troup County High School class of 2017.

The class of 273 students was led by valedictorian Kiara Thompson, who led off the school’s commencement exercises by giving six lessons she learned in high school. She told the class that hard times will pass, that friends come and go and that heartbreaks happen.

“It’s just part of growing up,” Thompson said. “You are going to make a million mistakes, but that’s OK. A mistake is only a mistake if you don’t learn from it.”

Finally, she wrapped up her speech by thanking her parents and all of the others who helped her get through this stage of her life. Throughout the night, that was the common theme. As they prepare for the future, each speaker made sure to take time to reflect on those that have guided them through the last four years.

“Congratulations class of 2017. This is the first step toward greatness, and we are all on the path,” Thompson said.

Salutatorian Kelsey Luke talked about the closeness of the class of 2017 and looked back on some of their fun moments since middle school.

Before receiving their diplomas, the class heard from principal “Chip” Medders one last time. He said this is his tenth graduating class at Troup, but that he’ll never forget this one.

“In those ten years, I have never seen a class take ownership of a school like you did this year,” Medders said. “I don’t say this lightly — you are a special class that will not be forgotten. You have left a legacy for all seniors to live up to.”