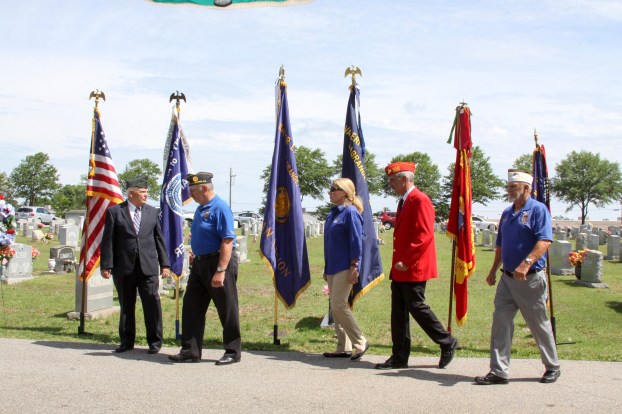 Leaders from the West Georgia Veterans Council prepare to present a wreath to honor a fallen soldier. (Photo by Alicia B. Hill | LaGrange Daily News)

LaGRANGE – A small crowd stood at attention at Shadowlawn Cemetery on Monday as local veterans honored the brave men and women who gave their lives for our nation.

During the annual Memorial Day service, past and present military spoke on the impact that their brothers in arms have had on the nation throughout history.

“There are countless stories throughout history… of warriors and their sacrifice of life and liberty for our future,” said Lt. Col. Ruben Martinez of the U.S. Marine Corps. “They gave up their liberties and lives, so that we may live with liberty and passion.”

Martinez reflected on those who died in service to our country who received little recognition after their death but willingly gave their all for their nation and its citizens none the less.

“These veterans once wrote a check for you and the United States government for everything up to including their life to defend our nation,” said Past Commandant Bernard Bledsoe of Marine Corp League, Det. 1040. “It is an honor to be a veteran.”