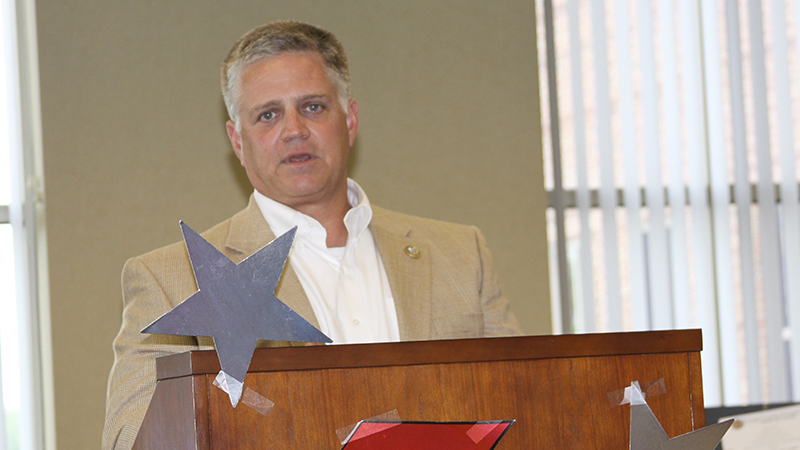 Congressman Drew Ferguson spoke on the bright futures of those graduating at the event, drawing on the time his dental practice in West Point spent volunteering with Hope Harbor, a Christian recovery center and the lessons he learned through that experience.

“What we learned in that process is that there is – for every addiction, every bit of problem that comes with that – there is a real human being behind that statistic,” Ferguson said. “There is a man or a woman that has a future. That has a lot to offer this community and this world. They have a lot to offer their families. They have a lot of love to give. They have a lot of love that they want to receive, and so for a court like this to exist – to say to our young people, to members of our community that there is an opportunity for you, and we need to come together as a community and help you reach your potential – I think is remarkable.”

Thanks to the drug court, those statistics are looking a bit better for Troup County, with the court’s primary goal of reducing re-offenders and helping people live full lives after recovery showing measurable results.

“That is a pretty good number. 75 percent of drug court graduates do not reoffend. That is an amazing number. Two and a half times the rate, and that is what this is all about.”

Those numbers only serve to highlight the hard work of the nine individuals who graduated from the drug court, a comprehensive substance abuse treatment program that is based in accountability and close supervision.

“The struggle is long, and it takes a lifetime to work through,” Ferguson said. “The good news is that now that you’ve seen that people love you. They respect you.  They want you to succeed. There is an entire network of people here that are willing to help you along that way, and that is remarkable because I know the troubles. I know the struggles that it takes, and I know that because I’ve seen members of my own family go through this, and it is a long journey. You cannot expect that in a day’s time, it is all going to go away and be like it never existed, but the good news is there is so much hope, so much love and so much support from this community.”

Those involved in the program showed pride in the progress that the graduates have made. Many were jobless and homeless at the beginning but now have steady jobs and nice homes.

“I’ve watched all of these people really throughout the drug court process, and I am happy to see them here today to graduate,” said Judge Emory Palmer who presided over the drug court before Key took over.

Troup County’s Felony Adult Drug Court has had 50 participants since it was founded in 2011. It is estimated to save courts up to $13,000 for every individual served due to what it would cost if instead of receiving guidance and support from the drug court, those graduates had instead gone back out and become re-offenders.