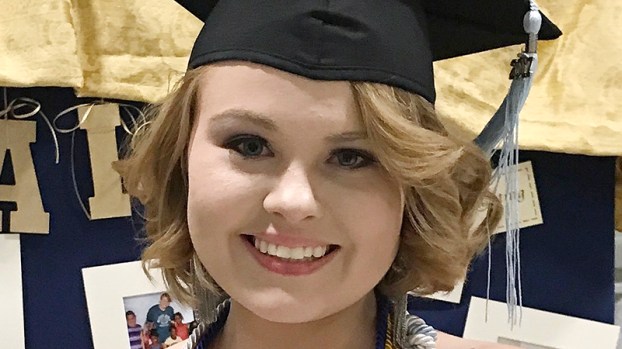 LaFayette Christian School valedictorian Abigail Hughes said the last few weeks have felt like a roller coaster ride, but her life won’t be slowing down any time soon.

Hughes gave her valedictorian speech Saturday during the LaFayette commencement ceremony, received her diploma and was already out of LaGrange for good 72 hours later. Her family moved to Blue Ridge and the moving truck was ready to go right after the graduation.

“LaFayette the last week of every school year, they take the seniors to New York, so I was in New York from Monday-Thursday, got home Friday, had graduation Saturday and moved on Tuesday,” Hughes said. “Everything has been crazy.”

Two weeks from now, she’ll be moving again — into a dorm room at Georgia Tech, where she’ll be taking summer classes. She still has even more packing to do.

“A lot of it is already packed up, but there are still some stuff like some clothes that I’ll have to get together,” she said.

Hughes isn’t just a moving expert though — she’s got just about perfect grades. She has a weighted GPA of 4.3 and made a composite score of 31 on the ACT. She said her average grade in high school was above a 98.

“I’ve worked really hard all of my school career,” she said. “I’ve always tried to do my best, and I’ve worked as hard as I possibly can in order to show that and for it to pay off and to be valedictorian, it meant a lot.”

She will major in computer science and will pursue a degree in cybersecurity. Until last year, she wanted to be a neurosurgeon, but last year she started learning computer programming in her spare time.

“I realize that’s a majorly nerdy thing to do, but I starting learning it in my spare time, and I realized how much I liked it,” Hughes said. “I started researching degrees I could get and jobs I could do and found cybersecurity, which is super interesting.”

During her freshman and sophomore years, she was on the school’s archery team, which has reached

She earned the Zell Miller Scholarship which covers all of her tuition for Georgia Tech and the Hatton Lovejoy Scholarship, which is sponsored by the Callaway Foundation. She participated in chorus and drama for all of her time at LaFayette and was on student council for three years.

She also really enjoys riding horses, painting and doing ballet. She credits her faith in getting her to this point.

“It is pretty much to me than I could ever express,” she said.

Her parents are Ginger and Clinton Hughes and she has a younger sister named Annelise.

LaGRANGE – Everywhere you turn right now there seems to be fresh asphalt on roads in Troup County, and it’s... read more