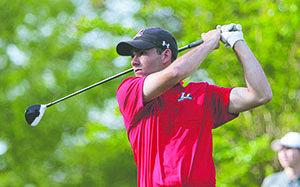 LAGRANGE – Nobody swung the sticks better than Logan Lanier.

Lanier, who had an outstanding senior season for the LaGrange College golf team, has won the Jack Nicklaus Award, which is given to the country’s best NCAA Division III golfer.

Lanier completed his season by finishing fourth in the NCAA tournament in Florida, and it was his ninth consecutive finish of fifth or better.

Lanier won two tournaments, including the USA South championship that was held at his home course of Highland Country Club.

LaGrange College coach Lee Richter, who has watched some phenomenal players come through the program over the years, praised Lanier for what he did on the course and off.

“Logan is not only a good player but even a better young man and I can’t think of someone more deserving than Logan,” Richter said. “He was an academic All-American so he was good in the classroom of which I’m also proud of. He’s going to make someone a good employee one day. If every young man was like Logan I would coach till I was 100.

“His parents did a heck of a good job raising him. He’ll be successful in whatever he decides to do.”

The Nicklaus award was given to players in NCAA Division I, II and III, as well as to the top players on the NAIA and NJCAA levels.

Those five players will get together today at Scioto Country Club in Columbus, Ohio for the Barbasol Shootout, and the winner will earn an exemption into the PGA Tour’s Barbasol Championship in July.

On Sunday, a banquet will be held to honor the Nicklaus award winners before the final round of the Memorial Championship.

Lanier leaves behind quite a legacy of success at LaGrange College, and his senior season was his finest one.

After finishing 11th in the season’s first event, the NCAA Division III Fall Preview in September, Lanier placed no lower than fifth in any of his final nine events.

At the Royal Lakes/Oglethorpe Invitational in October, Lanier finished tied for first after closing with a 68.

Lanier’s other win came in the USA South championship, and he shot a final-round 69 to earn the three-stroke win on a course where he has spent so much time over the past four years.

“This is a dream come true. You couldn’t finish it off a better way,” Lanier said after the win. “I got off to some shaky starts with a double bogey and two bogeys on the first hole. But I stuck to my game plan and really tried to stay patient. I knew there were some birdies out there so I knew I had to play my game and add them up at the end.”

Lanier had second-place finishes in the Chick-Fil-A Collegiate Invitational and Emory Invitational, and he placed third in the Callaway Gardens Invitational.

Lanier was fourth in the NCAA tournament and the Golfweek Fall Invitational, and he was fifth in the Jekyll Island Collegiate and the Wynlaks Intercollegiate.

In the NCAA tournament, Lanier made a final-round charge and pulled into a tie for the lead on the back nine, and he ended up finishing three shots behind the tournament winner.

Lanier was a four-year member of the Panthers’ lineup, and he was a three-time Division III All-American, and he made the first team the past two years.

Lanier was part of an exceptional senior class that also included Osborn Theam and Anthony Scolapio, and those players were a part of teams that made four consecutive NCAA appearances.

All three of those players earned postseason honors.

Lanier, Havixbeck and Scolapio were named All-American Scholars by the Golf Coaches Association of America.

Theam was also a semifinalist for the Nicklaus award.

Lanier won the LaGrange College Eagle Award, which is given to the school’s top male and female athletes.