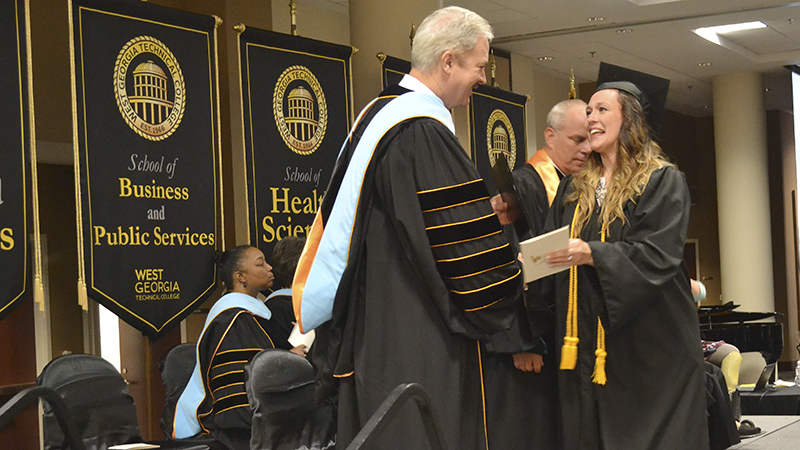 On Thursday night, West Georgia Technical College celebrated a huge milestone, as 150 graduates crossed a stage, shook President Steve Daniel’s hand and received their degree. Of course, just about every college in the country had a similar commencement ceremony in the last month or so.

The big difference for WGTC is the college was holding its 50th graduation ceremony — a milestone that highlights West Georgia Technical College’s history in the Troup County community and in the other communities it serves through its nine locations.

“I think being around for a half century and being focused on that one area of workforce development is quite unique and many, many states don’t have that history of creating that type of network,” Daniel said. “The fact that we are one of those colleges that has had a chance to do that for 50 years is pretty unique.”

West Georgia Tech has locations in Carrollton, Newnan, Douglasville, Franklin, Greenville, LaGrange and Murphy, but it’s history with Troup County began five decades ago when the college was known as Troup Tech. The college opened its doors in 1966 and held its first graduation ceremony in 1967. Since that time, it has undergone several transitions through mergers, including the most recent one in 2009 when West Central Tech and West Central Tech combined to form the current WGTC.

The college’s 2017 spring enrollment was 6,588 students, with 40 percent of those students enrolled in either the College of Nursing or the College of Health Sciences. The college is accredited by the Commission on Colleges of the Southern Association of Colleges and Schools and awards technical certificates, diplomas and associate’s degrees.

Daniel was celebrating his own achievement Friday, as he completed his third year as WGTC’s president, but he’s nowhere near the longest employed person with the college.

Vicki Smith, a student affairs specialist at the LaGrange campus, doesn’t know anyone who has been at West Georgia Tech longer than she has.  She graduated from the college in 1985 with a degree in accounting and has spent the majority of the last 32 years working in the admissions department.

Kay Humphries, enrollment center coordinator for WGTC, is another longtime employee, but she is calling it quits after 18 years. She’ll be officially retiring in June after nearly two decades of work for the college, although she admits she’s going to miss it. She said it’s easy to see the effect WGTC has had on the community.

“We still have people when we go out that say ‘oh, you are with Troup Tech.’ There are people that went to school there and they still call it Troup Tech,” Humphries said.

The college has recognized the 50-year anniversary by talking to 50 alumni and posting their stories on the school’s website.

Many of those students went to school in Troup County and credit a large part of their success to their time at WGTC.

“I think that’s a testament to who we are because I tell everyone our product is our students and our graduates,” Daniel said. “The fact that you see some of them having such successful careers and attributing that back to their foundation of their technical skills is really heartwarming to see. I think out of all the things we’ve done with this, I think highlighting that is really an inspiring piece that hopefully those people have enjoyed participating in. We’ve gotten really good feedback from that and I’m proud of that.”

Daniel said branding was one of his three biggest focuses when he first took over and it shows in WGTC’s updated logo, which includes the phrase “50 years of changing lives.”

“I felt like we needed to raise our standard of who we were, define who we are, the look and feel of a two-year college. The biggest thing that offends me is to hear someone call us a trade school or a tech school,” Daniel said. “We haven’t been that in 20 years.”

There are countless examples of students from Troup County who has used their WGTC degree to start a successful career. One of those examples is Heather Andrews, a 1994 graduate in accounting, who is now the Human Resource Specialist at KIA Motors Manufacturing.

“The combination of my degrees has been a really good fit and led to a lot of opportunities for me,” Andrews told WGTC. “I love my job and I feel prepared to do my work every single day that I come into the office. I have West Georgia Tech to thank for giving me that foundation that I’ve been able to build on.”

“I chose West Georgia Tech because I wanted to get into the workforce as quickly as possible,” said Anthony Materna, who graduated Thursday with an associate’s degree in Radiologic Technology. “It was so convenient for me, and it was a very rewarding experience overall. There’s definitely a family atmosphere that makes coming to college exciting instead of overwhelming. I feel totally prepared to enter the workforce, and I’m looking forward to continuing my educational career based on the great foundation I received at West Georgia Tech.”

Daniel said the college has focused on three areas when he first started.

He wanted to focus on partnerships with businesses, industries and other four-year schools. He said WGTC has a project with Kia to train and upgrade skills for their current workforce and that helps with future recruitment of their maintenance team members.

WGTC also has partnerships with Swift Trucking, Southwire in Carrollton and Powertech among many, many others. The college is also focusing on enhanced manufacturing in Troup with its precision manufacturing lab.

“We put almost $2 million worth of equipment to the precision manufacturing lab,” Daniel said. “We have completely updated and renovated lab to support the Kia’s and the Kia suppliers, the Century Tires, and those businesses that have come to know Troup County and LaGrange and to make sure we have a resource there that is second to none and how we can train a workforce.”

Fake prescriptions popping up in LaGrange