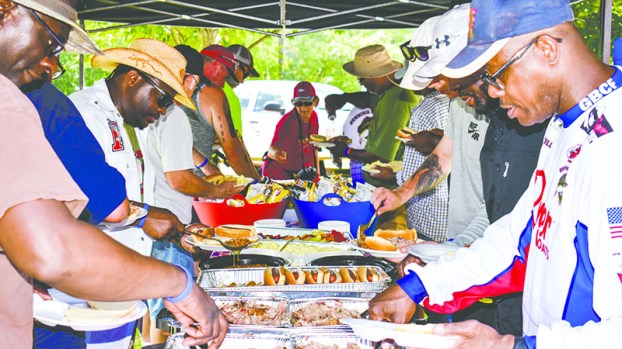 Participants in the Take a Warrior Fishing event, including sponsors and volunteer boat guides, prepare to eat lunch at the Highland Marina on Saturday. (Photo: Melanie Ruberti | Daily News)

Jasmine Twine held a fish for the first time on Saturday while out on the docile waters of West Point Lake. It was one of the proudest moments in her life.

“I was so excited,” Twine said with a smile.

The novice fisherman also caught ten fish while boating near the waters of the Highland Marina.

She and fellow military service men and women headed out on boats from the Highland Marina early Saturday morning for the fifth annual Take a Warrior Fishing tournament.

The event, sponsored by the U.S. Army Corp of Engineers and many others, handed out awards to the military service members who caught the most fish, the largest fish and more.

But for Twine and several others out on the water that day, the experience was not a competition. Instead, it was a personal achievement.

Twine was an Aviation Boatswains Mate Handler in the United States Navy when she began experiencing headaches and blurry vision.

She was on ship in December 2012 when doctors discovered the devastating diagnosis.

“They did an MRI and saw a cyst on my brain, blocking my vision,” Twine explained. “They (doctors) said I could have surgery to remove it (cyst) or die. I chose the surgery.”

Twine suffered complications during the operation and awoke to find she was paralyzed on the left side of her body. The young woman also suffered from short term memory loss, cognitive deficits and aphasia – she lost her ability to understand speech and communicate with others.

Twine was medically discharged from the Navy and airlifted to the Shepherd Center in Atlanta. The hospital specializes in spinal cord and brain injury rehabilitation.

“They taught me how to walk again and how to drive again. I also went through therapy while I was there to get used to the ‘new me,’” Twine said.

“They (Shepherd Center) taught me skills to help me get through day to day … to process things. I still use those skills today.”

Twine has come a long way since December 2012. She went back to school and also runs the Decatur branch of the Atlanta Warrior Peer Support Group, which is affiliated with the Wounded Warrior Project.

“We talk about our issues and our struggles,” Twine said. “It’s nice to be in a group that can understand what each person is going through … outside of our families.”

The military service men and women meet once a month to talk, but also perform various service projects and take fun trips, such as the one on Saturday to fish the waters on West Point Lake.

“It’s therapeutic to be out on the water and to meet others who have gone through similar experiences,” Twine said. “You get to bond with other ‘warriors’ and there’s a lot of comradery. You know it’s a good day when everyone says, ‘That was fun.’”

“The smiles on the soldiers and veterans’ faces say it all,” said Nathaniel Coakley, president of the Fort Benning Wounded Warrior Association and retired Army soldier.  “Some of our people have never fished before. They go out on the water, have a great time and share their experience with their peers. This (event) gives them a new outlook on life, and they focus on what they can do – not what they can’t do.”

More than 40 military service men and women, from all service branches, showed up on Saturday for the Take a Warrior Fishing event, said David Barr with the U.S. Army Corp of Engineers.

Some of the military participants were injured while serving their country, but the tournament was also open to all veterans.

“These folks give up a lot for us so it’s good to give back to these great veterans and warriors,” Barr said.

Twine said she enjoyed the relaxing day on the water, but more importantly she loved seeing the smiles on the faces of her fellow comrades.

“To see them out here and having fun keeps me going,” she said. “People ask me if I get tired doing all of this. I do. I have a headache right now. But seeing my fellow warriors gets me going – it’s worth it.”