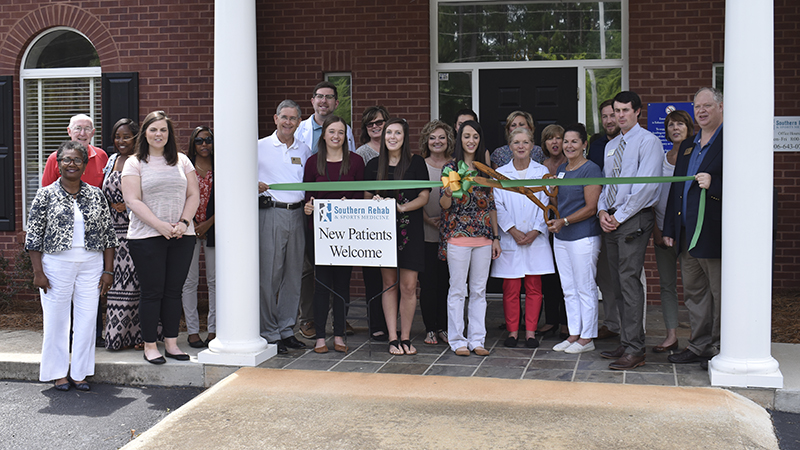 WEST POINT – Southern Rehab & Sports Medicine celebrated the ribbon cutting ceremony for its third location on Monday. The therapist-owned outpatient physical therapy practice now has locations in LaGrange, Columbus and West Point, and was also named the LaGrange-Troup County Chamber of Commerce Small Business of the Year in 2017.

The West Point office is located in a building shared with West Point Family Practice, located at 1610 E 10th Street.

Dr. Josh McGinty and Lori Jeter purchased what was Southern Therapy Services in 2009, forming their own practice, Southern Rehab, out of that purchase. Since that time, the venture has been steadily successful. The decision was made to open a second location in Columbus roughly three years ago, and the location in West Point has been seeing customers for roughly two months.

“We’ve been here about eight weeks now,” McGinty said. “We started out just at two days a week, then we got busy and went to three days a week, now we’re at four.”

Southern Rehab is a full orthopedic durable medical equipment (DME) supplier, and offers a number of other services such as aquatic therapy, manual therapy, geriatric PT and many more. In addition to these services, the practice is also dedicated to helping provide athletic trainers for the local high schools in Troup County for sporting events.

“We’re involved with making sure all the high schools have athletic trainers on the field,” McGinty said. “Whether we contract with them (schools) or help them with recruiting.”

Looking back, McGinty never envisioned Southern Rehab would grow out of the LaGrange office.

“No,” he said, with a laugh. “We thought the LaGrange clinic was going to be it. But we had an opportunity in Columbus and that went well, so we got to thinking about reaching another group, which led us here.”

The practice employs 25 people currently, spread across the three locations.