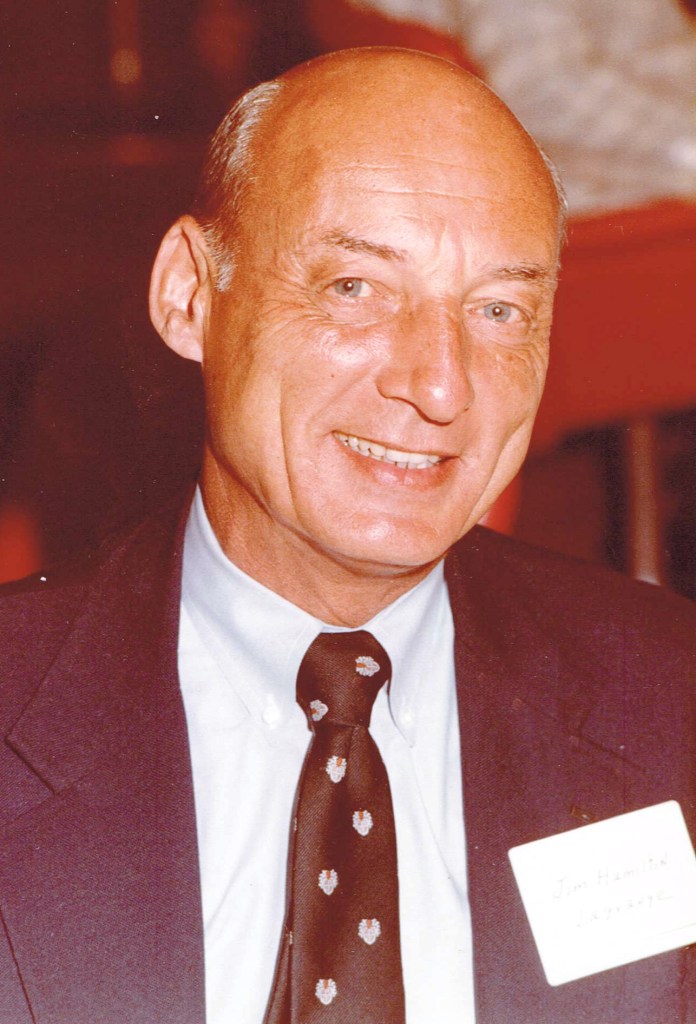 Hamilton, known by most as Jim, served as one of the founders of the LaGrange Industrial Development Authority in the  1970s and helped attract dozens of industries and businesses to the city during a crucial time. Hamilton led the way after Callaway Mills sold to Milliken and the city’s future growth, which was tied to its strong hold on the textile industry, looked in doubt.

“You had 2,500 people who had never worked anywhere but a textile mill. They had no education. They didn’t know what to do. There were no jobs here for them,” said Jane Fryer, who served as president of the LaGrange-Troup Chamber of Commerce during that time. “Jim had this vision of creating an industrial park and bringing in industry to LaGrange, Georgia. Jim was the leader of it because he had the vision, and he also worked for a bank where he had access to money to make things happen. “

“Without his vision and without his leadership, there would not be a single industry there today. I truly believe that,” said Fryer, who now works as the executive director of the Meriwether County Development Authority. “He was my mentor. I didn’t know anything, but we all worked together and figured it out. We were very successful because of his leadership.”

The industrial park off Greenville Road was named Jim Hamilton Industrial Park to recognize his many contributions to the LaGrange community.

“His vision took us from a one-industry textile town to growth and development for the future, realizing textiles might not be here forever,” said Chris Joseph, a longtime friend of Hamilton. “It turned out his vision was absolutely true. I have to say it kind of saved the town, or allowed us to move along so much better than we ever would if he had not been the leader that he was, the visionary that he was.”

Dr. Robert Copeland said Hamilton was in his element with the industrial authority.

“He was a real cheerleader, had limitless enthusiasm and was the ultimate salesman,” Copeland said.

Hamilton is survived by his children Scott, Paige Kerr and Holly Wells, his daughter-in-law Cindy Hamilton, son-in-law Mike Wells and his grandchildren Cecilia and Hamilton.

Scott said his dad was an outstanding father and that he supported his children through school and athletics.

“He laid a great foundation. We were all successful in our business life,” said Scott, who now lives and works in California.

Jim and his wife Bobby Goen, who passed away in 2015, loved to travel the world. They went to London, Hong Kong, Paris, Greece and other faraway places.

In his later years, Hamilton kept that going through technology, Scott said.

“He was always on his iPad exploring the world through technology. He was always looking at new innovations, new business innovations,” he said. “He was much more advanced in his use of technology than people a tenth of his age.”

Hamilton eventually left for Augusta before returning to LaGrange in retirement.

Services for Hamilton will be held June 17, 2017 at 2 p.m. at LaGrange First United Methodist Church, located at 401 Broad Street in LaGrange.