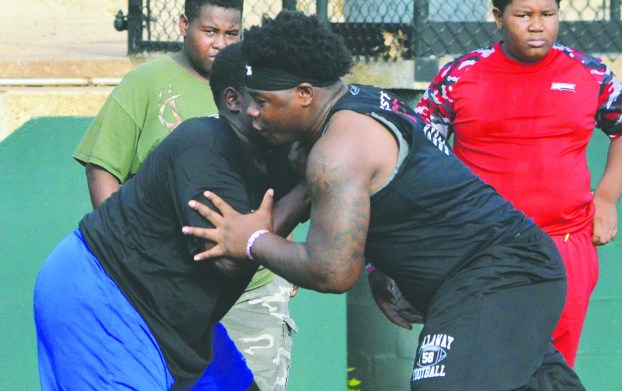 Callaway’s Jones has plenty of options

Even before he’d played his first down of high-school football, Jones had received numerous college offers, including one from Nick Saban at Alabama.

Now that he has two seasons of varsity football under his belt, the all-state offensive lineman has offers from major programs across the country.

For Jones, there is no rush.

He does, after all, have two seasons of high-school football remaining, and it’ll be a year and a half before he’s able to sign a letter of intent.

When Jones does make his decision, it’ll be an informed one.

Jones has visited dozens of schools over the years, and he was at the University of Alabama on Sunday.

For the rest of the summer, Jones will continue to make recruiting visits and attend camps as he decides where he wants to spend four years of his life.

“I took my break, but this is one of my busiest times of the year,” Jones said. “I’m going to be going all summer. I’ll be going all over the country. I’m going now. This is the time when it starts picking up.”

The summer isn’t just about recruiting.

Later this week, Jones will get a chance to test himself some of the best high-school players in the country.

Jones will participate in the Rivals 100 Five-Star Challenge on Friday and Saturday in Indianapolis.

As the name indicates, it’s for the best of the best.

Only 100 players were invited, and they are all listed as four-star recruits by Rivals.com.

A year ago, Jones also was a part of the Five-Star Challenge when it was held in the Georgia Dome.

Jones said this is an event that’s been on his “bucket list, and he’s also hoping to attend Nike’s The Opening football camp and play in the Army All-American Game.

When the high-school season rolls around in August, Jones will be a foundation of a Callaway team that will have high expectations.

A year ago, Jones and the Cavaliers went 13-1 and made it to the final four of the Class AA state playoffs before falling to Benedictine.

An explosive offense was a big reason why the Cavaliers were in the hunt for a state title.

Each of those players was aided by an offensive line, led by Jones, that dominated the line of scrimmage.

Sanders and Johnson graduated, but Atkins and a host of other talented skill players return, and the offensive line is mostly intact.

“We lost some great players, but we’re still going to get it done,” Jones said. “We won’t have Braylon to go get it, but we’ll have people that can make up for it.”

Last weekend, Jones was helping out at the West Georgia Superstar Football Camp as an instructor.

Jones grew up attending the camp, and he said “this was one of my favorite things to do.”

While Jones is an elite player now, he said it was a bit of a late bloomer.

“I didn’t good until my eighth-grade year,” he said. “I was out here going through the motions. I was lazy. But this helped me a lot.”

In the role of instructor, Jones said he sees himself in some of the campers, and he enjoyed helping them out.

“Some of the bigger boys, when they’re running they’re coming in last,” Jones said. “That’s me. I never was a runner, and I’m still not. But you’ve got to. A lot of them boys are getting better, just like I did.”

By Kevin Eckleberry kevin.eckleberry@lagrangenews.com ATHENS – He made quite an impression. Last week, a trio of Troup High football players... read more