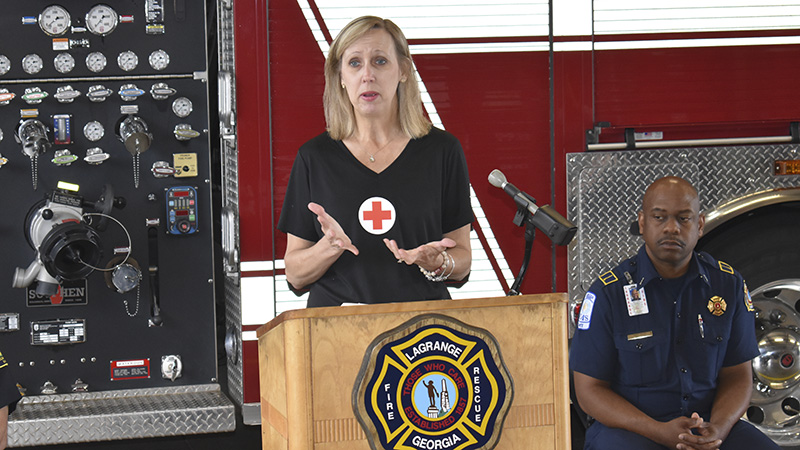 Connie Hensler, executive director of the Red Cross of Central Midwest Georgia, speaks to a crowd gathered at LaGrange Fire Department Station No. 1 on June 6 in regards to the smoke alarms that help save seven lives in a home fire on March 27. --Baker Ellis

Tuesday was a day of celebration for the Red Cross and the LaGrange Fire Department, as both took time to gather at the fire station on South Davis Road to give recognition and commendation for seven lives saved.

Early in the morning on March 27, Nakia Bell awoke to the sound of smoke alarms blaring. She aroused the other six family members in the home, and all safely escaped a fire that damaged the home severely.

The smoke alarms that woke her up were installed in October by the Red Cross as part of the Red Cross Home Fire Campaign, which is made possible in Georgia and nationwide through partnerships with local fire departments and community volunteers.

“The American Red Cross has been putting in free smoke alarms in your community (LaGrange) for over three years now,” said Divina Mimms-Puckett, regional communication manager for the Red Cross of Georgia. “We put in alarms as part of our home fire campaign back in October to a family on Addie Street. Last month the home caught fire. The family heard the alarms and was able to get all seven members in the house out of the house and escape the fire.”

The Bell family almost did not allow the Red Cross to install the smoke alarms when volunteers knocked on their door in October, but eventually decided it was worth the time. The decision ended up being a life-saving one.

“We’re here to celebrate the fact that the family is alive today,” said Connie Hensler, executive director of the Red Cross of Central Midwest Georgia. “The mission of the Red Cross is to prevent and alleviate human suffering in the face of emergencies by mobilizing the power of volunteers and the generosity of donors. We’re very excited to get to celebrate the lives that were saved.”

On average, approximately seven people are killed per day in the United States due to home fires. In this particular instance, seven lives were saved due to the installation of simple smoke alarms.

“We want to continue to educate the community about the importance of having working smoke alarms, and creating a fire escape plan,” Lt. Chris Taylor said. “Smoke alarms do save lives. We had seven people who survived a very deadly fire, and that speaks volumes.”

Captain Chad Davis was one of the first responders on the scene that night, and spoke to the damage the fire, which was an electrical fire caused by a lamp, left behind.

The Bell family was not immediately available for questions or interviews at the event.