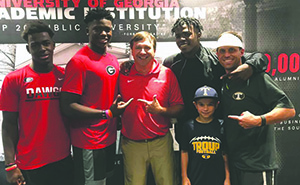 ATHENS – He made quite an impression.

Last week, a trio of Troup High football players attended a football camp at the University of Georgia.

Another Troup player, Andy Boykin, was invited to participate in the camp, and that turned out to be a great thing for him, and potentially for the Bulldogs.

Boykin, a sophomore who played at LaGrange High last season, received an official offer from Smart before the Troup contingent returned home.

“Andy’s offer kind of surprised us all,” Troup head coach Tanner Glisson said. “We weren’t expecting that. We were just getting him some experience, getting him up here. Of course King and Kobe already have offers from them. So we got up here, and he had a real good day, and Kirby just really liked his work ethic.”

Boykin was a freshman tight end for LaGrange last season, and he made an impact both as a pass catcher and a blocker.

Boykin will be a key member of a Troup team that is coming off a strong 2016 season that ended with a loss to West Hall in the first round of the state playoffs.

While Boykin’s list of accomplishments is modest as a high-school player since he’s really just getting started, Glisson said Smart believes he will improve a great deal in the coming years.

“To be honest with you, it’s really a good testament to us,” Glisson said. “One of the comments Kirby made was he knows he’ll continue to develop because of the program we’re in, and how hard we work ‘em. He said he has no problem being the first one to the table. So he offered him in his office before we left.”

While this is something new for Boykin, receiving offers from big-time programs is old hat for Hudson and Mwikuta.

They have both received offers from some of the most high-profile programs in the country, even though they both have plenty of time remaining as high-school players.

Mwikuta, who will be a junior linebacker, has offers from, among others, LSU, Georgia, Michigan, Auburn and Alabama.

The story is much the same for Hudson, who had a breakout freshman season as a wide receiver, with Tennessee, Miami, Florida State and countless other elite programs having made him offers.

Another Troup player, linebacker Joko Willis, has also received numerous offers, and he along with Mwikuta, Hudson and Boykin have offers from the University of Kentucky.

Those players and other will continue to attend camps at different colleges throughout the summer, which is a key time for recruiting.

Glisson said the camps aren’t just about recruiting, though.

“We use it as an opportunity to coach, and to learn different things, and to just be around football as much as we can,” Glisson said. “It’s a good opportunity to go get better.”