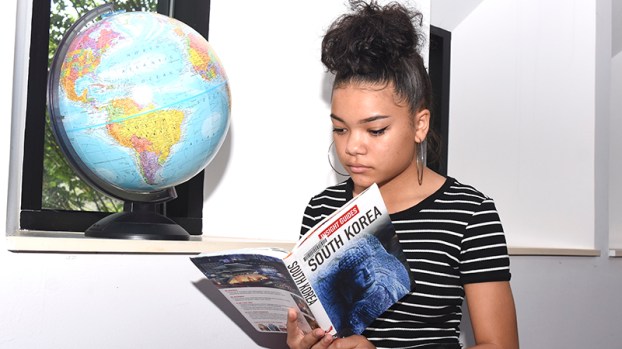 Cheyenne Booker has always been into Korean pop music and TV shows. Even when she didn’t know exactly what was being said, she liked that it was something different to watch or to listen to.

Now, she’ll get a chance to see South Korea firsthand.

Booker, a rising junior at Callaway High School, is one of 600 students from around the United States to get selected for the 2017-2018 National Security Language Initiative for Youth scholarship by the U.S. State Department’s Bureau of Educational and Cultural Affairs. She will leave the United States June 29 and will return nearly two months later on Aug. 13.

Booker has always wanted to travel, but she’s never been outside the country. She said after this first time is over with, she expects to leave the country a lot more.

“I like to being open minded about stuff and I can’t be entertained by just the American culture,” she said.

In the weeks leading up to her departure, Booker has been learning the Korean alphabet and everyday phases. If there’s any part of the trip that makes her nervous, it’s that she’ll be taking Korean classes while in South Korea.

She will be living with a host family and said she’s working on taking them gifts from where she lives.

Booker will miss time back home too. She’ll miss the first day of school and the first Callaway High School volleyball game of her junior year. In January, she wrote an essay that earned Callaway High $2,000 through Powerade’s Power Through contest. The money went toward whatever improvements the team needed.

One day, she’d like to play volleyball at the Olympic level.

“There are so many people who are really good at it,” Booker said of volleyball. “I can push to try to get that level but it’ll be really hard.”

She’ll also miss her family, but said she will probably not call home a lot because she wants to speak in Korean as much as she can while she’s abroad, just so she can learn the language.

“I’ll Facetime them sometimes, but I feel like to expose myself better, I don’t want to contact them a lot,” Booker said. “I don’t want to use a lot of English on the trip. I’m going to force myself to learn Korean.”

Booker’s dad, Tony, was a contractor for the military so he’s traveled the world. He said he’s been to more foreign countries than states.

He said Seoul is the biggest city he’s ever been in, and her mom, Sonia, has also been to Korea twice.

Both are excited for Cheyenne, but also are giving her tips to make sure she’s careful.

“I want her to be safe. I gave her tips on what to do and what not to do,” Tony said.

“The main thing is never travel by yourself. Always be with someone.”

Some of her friends are jealous and are hoping to take a similar trip in the future.

“I thought she was lucky because I had been wanting to go,” said Booker’s friend, Esther Duke. “I’m thinking about doing the same program next year.”

Booker said as far as she knows, she’s the only student from the LaGrange area who is taking part in NSLI-Y’s program. The program describes itself as “part of a multi-agency U.S. government initiative launched in 2006 to improve Americans’ ability to communicate in select critical languages to advance international dialogue and increase American economic global competitiveness.”

Booker’s trip is paid for, outside of her passport, but she’d like to have a little bit of extra cash for her trip.

She’s trying to raise money through YouCaring.com. To help Cheyenne, search fundraiser No. 835794 or visit this address: https://www.youcaring.com/cheyennebooker-835794.

The West Point Police Department is searching for two men allegedly involved in a shooting on Thursday night on the 1100... read more