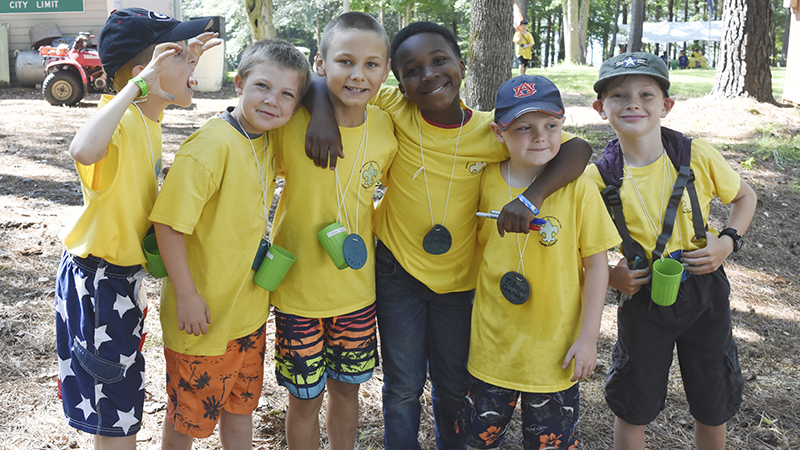 The final day of Camp Cowpie — a local boy scout day camp — was held Friday in its familiar spot on John Harris Road. At one point during the afternoon, a non-poisonous snake was found and a group of young campers grouped around a circle trying to touch it.

In the middle of that circle was 68 year-old Martha Evans, back for a 39th time hosting Camp Cowpie, and she was the one smiling the brightest. Even after all these years, Camp Cowpie still doesn’t disappoint.

“Somebody said how long you think you’ll keep doing this, and I said they’ll probably be singing ‘Oh Camp Cowpie’ when they carry me out feet first from the church,” Evans said Friday with a laugh. “I’m going to do camp every year. As long as I can do camp, I am going to do camp.”

The camp is for rising second graders through rising fifth graders and included 52 campers this year. The camp included archery, hiking, crafts, sports and other fun activities.

This year’s focus was on bugs and getting to know that all bugs aren’t bad bugs. The snake was a perfect example and Evans, knowing that many children don’t understand snakes, took advantage of a chance to let them get close to it.

“If we don’t understand nature, if we don’t appreciate it, preserve it and protect it, then that’s like destroying the world from the bottom up,” she said. “And I feel like Boy Scouts and Girl Scouts both offer a venue for all children, regardless of what they can do and what their abilities are.”

Evans first started with the Girl Scouts at Camp Echoee as a young girl and immediately fell in love with the aspect of a scout camp. After her oldest son became involved in Boy Scouts, she took over the camp program and moved it to her own land, where she has held the camp ever since, outside of a couple of years with unique circumstances.

“It’s hard to get yourself up to pull all this stuff out and put it back up, but it’s worth it,” she said. “It’s worth it to me.”

The camp ended Friday with a water slide and award presentation. Evans said the entire community deserves a pat on the back for helping keep Camp Cowpie going each year.

“All of LaGrange contributes to day camp,” she said.