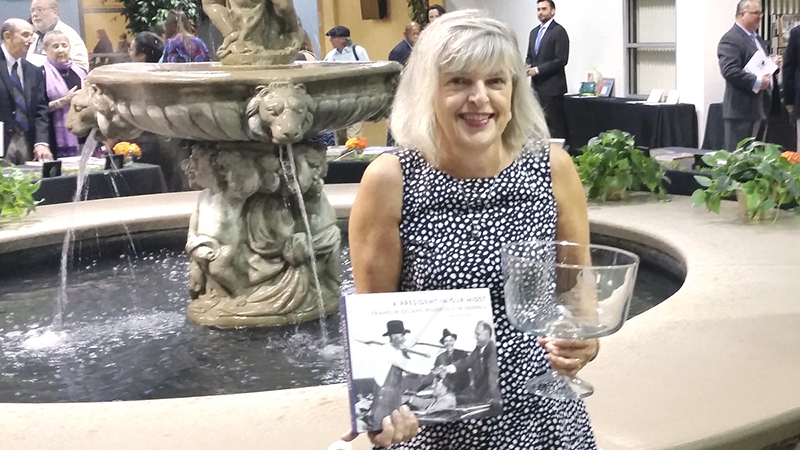 LaGrange’s Kaye Lanning Minchew is Georgia’s Writer of the Year for History.

Minchew, retired executive director of Troup County Archives, was honored this month by the Georgia Writer’s Association for her book,” Franklin Delano Roosevelt: A President in Our Midst.” The work was published in 2016 by the University of Georgia Press with support from Georgia Humanities.

“This visually stunning, carefully researched pictorial history of a national figure who considered Georgia his second state, gives authenticity to the rehabilitation of Franklin Delano Roosevelt at Warm Springs, where he recaptured his earlier optimism while rebuilding his physical strength and learning ways to draw attention away from his disability,” said Lora Mirza, a Georgia Perimeter College faculty member who judged the history category of the Georgia Author of the Year Awards.

The 53rd annual awards drew 126 nominees in 14 categories. Novelist and LaGrange College graduate Terry Kay was recognized as a finalist in the literary fiction category. Awards were presented June 3 at a banquet and ceremony at Kennesaw State University attended by more than 230 people.

“I was thrilled and humbled to be recognized as Georgia Author of the Year,” Minchew said. “There were many fine books in the history category, and it was a great surprise to hear my name called. Putting the book together required many, many hours of hard work, so it is wonderful to have the work recognized by the Georgia Writers Association.”

Minchew, who retired in 2015 after 32 years as executive director of the Troup County Archives and Troup County Historical Society, said she recognized over the course of her career that Georgia’s influence on Roosevelt was considerable but underappreciated.

“Despite the fact that Roosevelt visited Georgia 41 times between 1924 and 1945, historians have paid little attention to the significance of the time the 32nd President of the United States spent in the Peach State,” Minchew said.

Georgia helped restore Roosevelt’s sense of well-being after he contracted polio, for example, and provided the launching pad for his presidential campaigns, she explained.

“Troup County resident Kaye Minchew brings together many sources to give us a close-up picture of FDR in Georgia and of his ease with the people around him.  As voluminous as the Roosevelt literature is, ‘A President in Our Midst’ adds a needed new perspective.”

The  book uses almost 200 photographs from a variety of archives, but goes beyond the typical pictorial history, drawing on oral histories and newspaper and magazine articles for a rich text that lets the participants’ own words tell their stories.

“Georgia and its people played a central role in Franklin D. Roosevelt’s recovery from the effects of polio and his success as president of the United States.  This is an important story in our history, and I have been delighted to be able to share it through the book and through talks to various civic, church and book groups,” Minchew said.