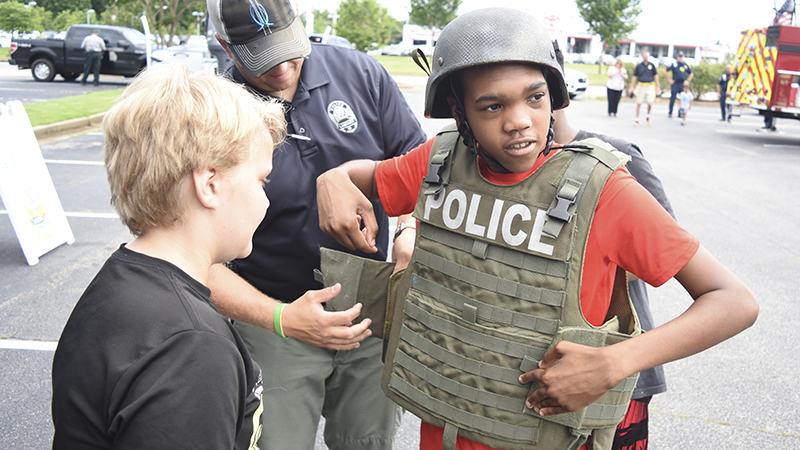 Brandon Maddox tries on a bulletproof vest while Isaiah Wood looks on. Maddox was one of several students that took part in Tuesday’s camp at the Mike Daniel Recreation Center.--Daniel Evans

On Tuesday morning, a wide variety of emergency vehicles gathered outside the Mike Daniel Recreation Center, but the only danger in sight was that local children might have too much fun.

The LaGrange Police and Fire Camp kicked off this week with a series of events for the older of their two sets of campers.

This week the camp is serving 20 students ages 12 to 16, but next week organizers are expecting over 60 students ages 7 to 11. The camp sessions are filled with fun events for the children and allow local law enforcement officers to get to know them in a positive situation.

“We do different stuff with them, and they have a lot of fun time and play a lot of games. They swim every day. We’ll take them to a movie one day this week, and there is a lot of recreational time — dodgeball, kickball, things like that.”

The camp is an annual tradition for the police department who expressed excitement about how many local children they will be able to serve with the camp this year.

“It is a free camp, and we have done it every year for 20 years,” Sgt. Marshall McCoy said. “It is for kids who may not get to go to camp because of cost — and that’s not all the kids who can’t afford it, but some of them — where they can go to camp.”

The fire department plays a major role in this year’s camp with demonstrations for campers and camp shirts that were designed by a local firefighter.

Tuesday was special though in that it gave campers a chance to get to meet a wide range of law enforcement members, ranging from the Georgia Department of Natural Resources officers to Crime Scene Investigators.

“This teaches kids at an early age what the agencies do,” McCoy said.

The local agencies that took part in the camp, were excited to talk to the campers about their jobs and how to stay safe.

“We are just talking to them about boating safety and water safety – wearing the appropriate sized lifejackets for their size, for if they go out to the lake and go swimming to not go by themselves,” said Sgt. Brent Railey of the Georgia Department of Natural Resources Law Enforcement Division. “We have a lot of children drown that way because they didn’t let an adult know that they were going.”

“(We talk to them about) staying out of trouble, safety, making sure they are wearing their seatbelt if they are riding in a car,” Master Trooper Dexter Cladd said. “Of course, this is the summer time, so a lot of kids like to ride bikes so the safety part of that.”

The state troopers encouraged cyclists to be aware of their surroundings and obey traffic laws.

They let the campers see some of the equipment that they use.

The campers also received a demonstration on how crime scene investigators dust for fingerprints at the event.

“It is pretty nice to see that they are interested and curious,” Detective Charles Brown said. “… I think it is nice to do this with the kids and with the public because kids are already naturally curious and at least that way you can show them, and give them a good understanding of exactly what we do on a daily basis.”

The camp will continue through the rest of this week, with the second session for the younger campers beginning next week.