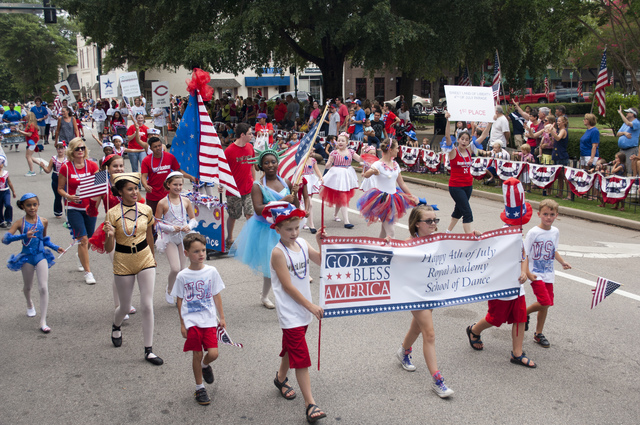 The Royal Academy School of Dance marches at the 2016 Sweetland of Liberty parade in downtown LaGrange. (File photo)

One great LaGrange tradition will give way to another as, fresh off  holding Camp Cowpie, the local Cub Scout Day Camp, Martha Evans turns her focus to the Sweet Land of Liberty parade.

Evans, who has hosted Camp Cowpie at her home for almost 40 years, will be grand marshal of the July 4th parade, founded 33 years ago by her friend and fellow Junior Service League member, the late Annette Boyd.

Participation is free and open to anyone 19 and under. Entry forms are available at the Mike Daniel Recreation Center on Lafayette Parkway or online at jsloflagrange.com.

People who’ve known both Boyd and Evans say they have a lot in common, including boundless energy, incredible creativity and an impressive ability to connect with children.

But the thing that defines them both, said Kim Crawford, a Junior Service League Sustainer and longtime Camp Cowpie volunteer, is patriotism.  Make that Patriotism, capital P.

“Patriotism was what Annette was all about, and it definitely fits Martha, too,” she said.

Boyd was locally famous for her lively programs promoting the parade, presented annually at all area elementary schools.   Dressed in red, white and blue, she’d woo the kids with raps and songs, including one that she once bravely performed before LaGrange City Council.

“The name’s Annette, and you can bet, I’m the proudest American that you’ve met yet!” the petite Boyd exclaimed in a great big voice.

Evans is equally legendary for her emphasis on patriotism through Scouting.  She begins every camp with a passionate explanation of the proper way to recite the pledge of allegiance to the American flag.

Evans’ point: there is no comma in the phrase “One nation under God.”  Saying the four words together emphasizes the link between nation and God..

“It’s  ‘one nation under God,’ not “one nation, pause, under God,” Brazell said. “Everybody who attends Camp Cowpie learns that.”

Local Scout leaders hope to recognize Evans’ decades of committed service with a huge turnout of Scouts for the parade.

“Martha is the master behind Camp Cowpie and has been for nearly 40 years. We want all Scouts to join us in walking in the parade, to say thank you for all she has meant to generations of Scouts,” said Joe Westbook, Yellow Jacket District Scout executive.

“Camp lets us make friends and learn lots of things. She really knows a lot about nature, and she helps us have fun, like when she showed me how to cook eggs on my buddy burner,” he said.

Junior Service League leaders are encouraging community groups, neighborhoods and families to renew or expand their support of the parade, as well.

“This year’s theme, ‘Faith, Family and Freedom,’ really lends itself to participation by church youth groups, families, neighborhood groups and community organizations,” said JSL President Ashley Mayfield. “We have made it a goal to try to grow the parade. It’s important to have widespread participation by children, but we also need a crowd to cheer them on. We encourage spectators to do their part.”

Parade founder Boyd saw the parade as a way to help parents teach patriotism to their children. It still is, Mayfield points out.

“One of the reasons JSL has remained committed to the parade is because it gives children an opportunity to develop and express their love of their country. This is a timeless value, and one we can all proudly support.”