One step closer for Troup gym 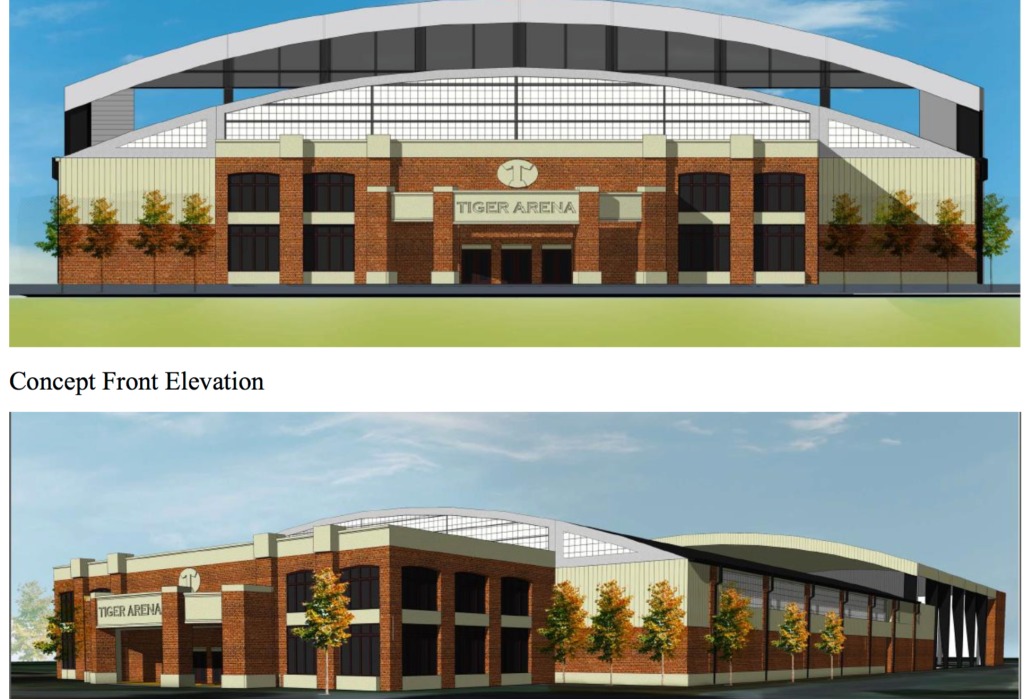 This artist rendering of the proposed facility was visible for contractors submitting bids. (Submitted)

LaGRANGE – Work on Troup High School’s new gymnasium is expected to be underway soon, following the school board’s official announcement of the contractor on Thursday night.

The Troup County Board of Education approved RaLin as the construction company for the new Troup County Comprehensive High School gymnasium at its regular meeting on Thursday. RaLin was one of seven vendors considered for the project and one of the three that made it to the final round.

“Of the vendors, we chose the top three contenders to come back and give oral presentations, and all three did,” Assistant Superintendent John Radcliffe said. “RaLin came prepared for the presentation, giving us a final possible budget, giving us a lot of detail on how they’ll approach this project and bring it to life over at Troup High School, and that is why the recommendation is for RaLin.”

The budget for the gym’s construction has been set at $10 million, and as the contractor, RaLin will receive a fee of 9.5 percent of the cost plus $30,000 for pre-construction services. Funds for the project will come from the Education Special Purpose Local Option Sales Tax that was approved last spring. Because the source of the funding is local, school system officials have requested that local workers be used on the project as much as possible.

“One of the things that we worked with the (LaGrange-Troup County) Chamber (of Commerce) on and through our sources is to make certain that we have significant participation by local contractors and local workers on these facilities,” Radcliffe said. “It is Troup County (Education) SPLOST dollars, Troup County employees, and we are looking forward to that.”

School board officials also cautioned that Radcliffe – who is over maintenance and operations – and others involved in the day to day process of working with contractors on the gym for Troup High School keep an eye on the budget, which is also supposed to cover the construction of a new gymnasium for LaGrange High School.

“In the (Education) SPLOST we had two gyms to be built – one at LaGrange (High School) and one Troup (High School),” Board Member Kirk Hancock said. “My personal view on that is to build two similar gyms – they are going to be on different lots and all of that – but the functionality of the two gyms were sold to be equal, similar.”

Hancock opposed due to a concern that the current estimated cost of the gym of $10 million – which could go up – could make it difficult to make a comparable gymnasium for LaGrange High School. Ted Alford noted that the concern was shared by other board members, and that they hoped to keep that in mind as they approve expenses moving forward.

Troup High School’s new gym has advanced more quickly because of the ease of acquiring land for the gym and the cost of building on the relatively level land compared to LaGrange High School’s proposed gymnasium, but both gymnasiums are important to the school board who emphasized a desire that both gyms be equipped equally.

“We have the ability to kind of flex (plans and finances) now so that we end up with two similar gyms within a budget that we can afford, but without knowing better insight into the LaGrange (High School gym) cost, my hands are going to feel tied delivering to LaGrange what we delivered to Troup, but under a very different cost structure,” Chair Ted Alford said.

Radcliffe confirmed that the land acquisition would be the biggest variable in the actual cost of the LaGrange High School gymnasium, but felt confident that the school system will be able to build similar gymnasiums for both high schools using the E-SPLOST budget.

The Troup County Board of Education is scheduled to meet again on July 17 at 5:30 p.m. at 100 North Davis Road.

Teeing off on homelessness