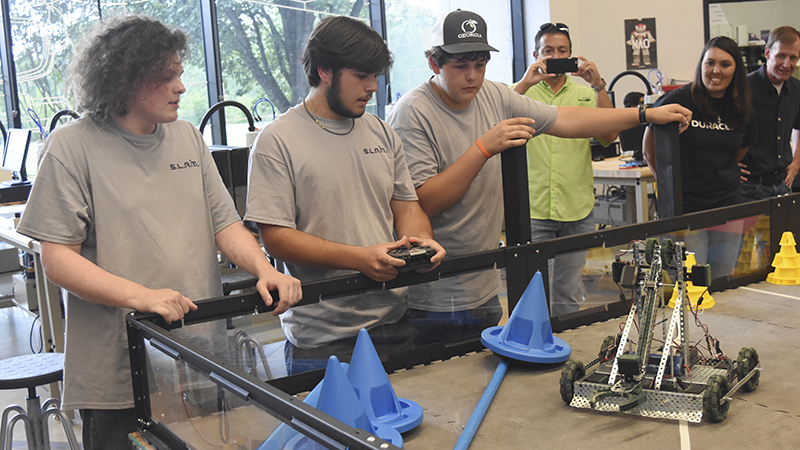 Elijah Daughtery, Bryson Ussery and Grant Shelton look on as Ussery drives a robot during Friday’s competition at the mechatronics lab at THINC Academy. --Daniel Evans

After spending the week building robots, teams of students went head to head Friday competing in front of friends and family to show off what they learned during THINC Academy’s week-long Students Learning About Manufacturing camp. The competition involved getting robots to move and stack cones, while also playing defense on their opponent, who was trying to complete the same task.

The tournament was double elimination, but the winners were never really in doubt. Teammates Bryson Ussery and Grant Shelton built a robot that was unmatched most of the day, including in the final.

“We built a basic claw bot where everybody else spent three or four days designing,” Ussery said. “We put it out there, figured out its strengths and weaknesses and built from there. Everybody else’s seemed to be wobbly and we put a lot of structural strength in ours.”

Then, Friday morning, they found themselves nervous.

“We were pretty confident in our robot, but as these came together we got a little nervous,” Shelton said, looking around the room at the other robots they’ve just beaten. “We thought we had a strong [robot], and I guess we did.”

The students toured four local manufacturing facilities — Milliken, Duracel, Kia and Mountville Mills — throughout the week. In the end, that was the most important part of the week — getting a chance to see the manufacturing jobs available locally.

“Every day after lunch we traveled to a local manufacturing facility. Our students get to meet with their technicians and engineers, spend some one on one time and see what it’s like for a day in the life and then actually tour the manufacturing facility and learn about that specific type of manufacturing,” said Joe Sumner, the mechatronics instructor and the career and technical education department chair at THINC College and Career Academy.

Sumner said the camp wouldn’t have been possible without the LaGrange Economic Development Authority and the local manufacturers that hosted campers.

This was the first time THINC Academy had held its SLAM camp, but it hopes to do so again next year.

One step closer for Troup gym