LaGrange police let the dogs out 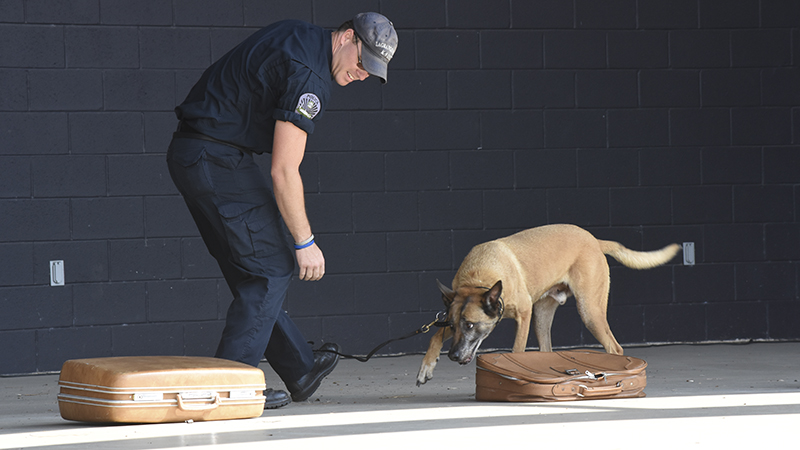 The LaGrange Police Department patrols our streets, arrests wrongdoers and keeps our city safe on a day to day basis. On Saturday at Sweetland Amphitheatre the department showed off four of its most important officers — police dogs Chico, Andy, Rik and Dax.

Each dog was brought on stage and three of them showed off their obedience and ability to help officers in the field. After the demonstration, the dogs posed for pictures with members of the community.

The event was organized by K9 officer Wendy Bryant, who said it was started in part to bring the community and police department together. She said in today’s world it’s important for people to see police officers as normal people.

“We wear this badge, but we are just as much as an individual. Our children are here supporting us,” Bryant said. “We are showing people we are just as human as you are. We show you as much respect as you show us, and we are no better than anybody else and I don’t think any of us in LaGrange overstep that boundary.”

Hundreds of people attended the event, which was free and included free hot dogs to the first 500 people.

K9 Rik showed how the dogs are used to sniff out drugs in bags and luggage.

K9 Dak was given an obedience test, where he was tempted with toys he likes, but instead did whatever command he was given. K9

Andy, the newest dog on the force, came out last and took part in a muzzle fight.

One thing that was obvious to any spectator Saturday was how close the bond is between officers and their dogs.

“They come to work with us for 12 hours shifts and then they come home with us,” said Corporal Mike Barton. “We spend more time with our dogs than our families. They are our partners so when it gets tough out there on the street, if I need a partner to come assist me, and I’m in a fight for my life, there might be some officers that run the other way, but that dog is coming.”