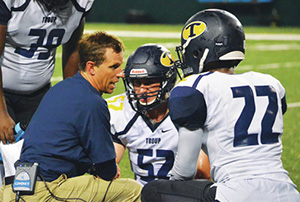 LAGRANGE – When the season ends for the Troup Tigers, head coach Tanner Glisson will still have another game to coach.

Glisson, Troup’s third-year coach, has been selected to be the head coach for the West team during the Georgia Athletic Coaches Association all-star game in December.

Glisson was selected by his fellow coaches across the state, which makes the honor particularly meaningful for him.

“Anytime things like this pop up when you’re nominated, or voted in by other coaches and stuff, that’s always a cool deal to me, because that’s your peers,” Glisson said. “I’m excited about that.”

The game, which will be played after Christmas, will be contested in Warner Robins.

Glisson’s staff will be made up of men who are all head coaches.

“I’ll have a staff of six or seven guys, coaching offense, defensive line, etc., and they’ll all be head coaches,” Glisson said. “So that’s pretty cool that we’re represented.”

Glisson came to Troup from Manchester before the 2015 season.

The Tigers struggled that year and finished 1-9, but they went 8-3 last season and placed second in Region 5-AAAA.

Troup begins its season on Aug. 18 with a home game against Hardaway.