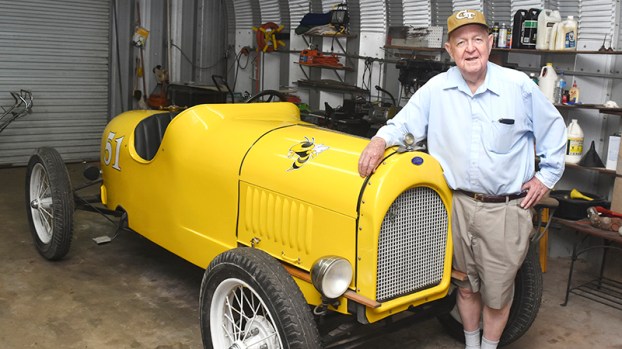 Fred Jones poses for a photo with his 1925 Model T Monday in his garage. Below, Jones sits in the driver’s seat of the car, which he’s donating to the Georgia Tech Auto Show. --Daniel Evans

In 2008, Fred Jones’ 1925 Model T Speedster helped him live out a longtime dream. Now, he’s giving it away, in hopes that it might inspire someone else to do the same.

Jones, a LaGrange resident, built the car with a goal of one day driving it in the Ramblin’ Wreck homecoming parade that Georgia Tech holds each year.

Nine years ago, Jones finally fulfilled his lifelong dream as he drove the car in the parade, which has been a Georgia Tech tradition since 1932. On Tuesday, he’s donating the same car to the Georgia Tech Auto Show. Sterling Skinner, the show’s founder, will pick up the car on Tuesday and haul it to Atlanta, where it will be used to promote the show and the university.  All that will be needed for the purchase is a bill of sale, Jones said. The car will officially be sold for $1.

“Cars like this can’t sit,” Jones said. “They have to be used, they have to be driven, and I didn’t want it just to sit there and do that. I’m getting pretty old.”

By just looking at Jones, you’d probably never guess he’s 88 years old. He still has his driver’s license and he lives independently at Vernon Woods Retirement Community. He makes it look fairly easy to get up and down from inside the car, even with its tight seating.

Jones’ 1925 Model T was inspired by the actual Ramblin’ Wreck vehicle that Georgia Tech uses at football games. That Ramblin Wreck is a 1930 Ford Model A Sport coupe and serves as a mascot for the college’s student body.

Jones’ speedster is painted the Yellow Jackets’ familiar colors of old gold and white and has the number “51” on the back fender. The number is a reminder of the year Jones graduated from Georgia Tech.

So, does he plan to take it for one more spin before giving it away?

“I don’t think so. I have driven it around down here a little bit,” Jones said. “There’s a few things that need to be done and they’ve got people that can do them as good or better than I can. It does run, and I want to let them take care of it, along with any little things they want to do to it.”

Skinner said the car won’t be sat in one place. It’ll be used all around the city of Atlanta to draw attention to Georgia Tech and the car show.

“It won’t be a static display. It’ll be driven around campus to different events to represent the Georgia Tech alums and car community around Georgia Tech,” Skinner said. “I expect we’ll take it to car shows around the Atlanta area.”

Skinner said the car will immediately grab attention due to the Georgia Tech logos on the side and its obvious link to the school.

“You have something with Georgia Tech letters on it, any Georgia Tech graduates in the crowd will be drawn to it,” Skinner said.

Jones said he started building the car by purchasing the frame off an old Model T. He dropped the frame six inches, bought a standard Model T engine and rebuilt it. Then, he took the magneto out of it to lower the car’s weight.

From there, he started piecing together the rest of the car. He found a body in California and added it and then had the entire thing painted.

He said there will only be one stipulation on the car being donated.

“I’m going to have only one condition on this. I don’t want them to sell it immediately,” Jones said. “I want to see if I can make it conditional that they will not part with this car until I’m gone.”

Jones said he wants to share the donation with the various car groups around LaGrange and that he doesn’t want a lot of special recognition for what he’s doing.

‘I’m getting all I need just by giving it to them,” he said. “I want to share this with the clubs here and to put it at the Georgia Tech club in Atlanta. That’s my reward for this thing.”

Sims Pond Farms hopes to become the official home of the local farmer’s market, and soon there may be the... read more