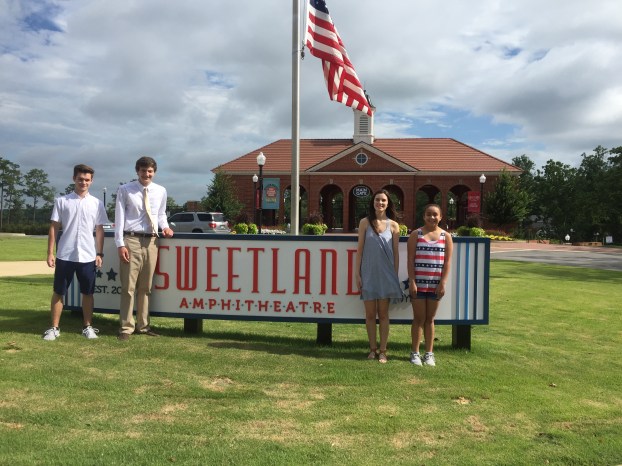 Award winners include three members of the Class of 2017 who exemplify the parade’s theme of “Faith, Family and Freedom, said Ashley Mayfield, Junior Service League president and chairman of the 2017 parade committee.   Honorees include Noah Crider of Callaway High School, the Uncle Sam Award; Emily Huff of LaGrange High School, the Lady Liberty Award and Ty Shadix of Troup High School, the American Eagle Award.  In addition to marching in the parade, the honorees will assist with the pre-parade program on Lafayette Square.

“The honorees were chosen by their schools because they display good character, patriotism and leadership,” said Carrie Blankenship, a Junior Service League board member who coordinated the awards for the parade committee. “Honoring outstanding youth is a tradition of the parade, dating back to its early days and founders Annette and Jim Boyd.”

The program, honoring grand marshal Martha Evans, gets under way at 9:30 on East Lafayette Square, opposite the traditional location due to hotel construction, and will be followed at 10 by the parade. Marchers assemble at Sweetland Amphitheater at Boyd Park, named for the parade founders, and proceed down Church Street to the Square. Judges will select winners of cash awards, including a $300 grand prize.

Crider, son of Wendell and Sonya Crider of Hogansville, was active in Air Force ROTC and band at CHS and at Hogansville Church of Christ, where his father is pastor. He plans to attend West Georgia Technical College to become a nurse.

“Noah is a wonderful young man who made a big impact on Callaway’s Junior ROTC program,” said former CHS teacher Marilyn Huberdeau.  “He was a great student who cared about his class work as well as helping others.”

Huff is the daughter of Laura and Tim Huff of LaGrange and was active in service-focused extracurriculars and the Blue Crew spirit club at LHS.  A member of First United Methodist Church, she plans to attend  Auburn University..

“She is a worthy choice for the parade because she is faithful to her values and a person of integrity and character,” Thomas said.

Shadix is the son of Joey and Calli Shadix and was involved in marching band, student council, National Honor Society and several service clubs at Troup. Active at Reed’s Chapel Baptist Church, he plans to attend Berry College.

His counselor, Bridget Benefield, described him as an “intelligent and respectful” student who is musically gifted, did not shy away from rigorous coursework and excelled in academics.

“Ty is fairly quiet and unassuming, but his talent, character and giftedness all speak volumes. I cannot wait to see what his future holds,” Benefield said.

Nunley is the son of Monica L. Peterson of LaGrange, Williams is the daughter of James and Margaret Williams of LaGrange and Billingslea’s parents are Ezekiel and Carrie Billingslea of West Point.

Registration for the parade continues. Participation is free and open to anyone 19 and younger. Forms are available at the Mike Daniel Recreation Center on Lafayette Parkway and online at jsloflagrange.org