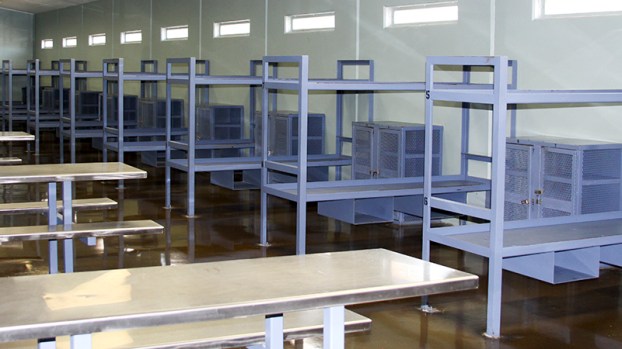 The dorm rooms at the Troup County Correctional Institute were empty on Monday. --Alicia Hill

All inmates out of correctional facility

The Troup County Correctional Institute transferred out the last state inmate from the facility on Thursday, over a week before the June 30 deadline. The dorms where those inmates stayed are now empty, but the rest of the building remains alive with activity.

“We are going to close down a couple of the dorms, but the rest of the building will be used for housing county inmates and the work release program, then of course the (public defenders’ office and county extension) offices,” County Manager Tod Tentler said.

The county inmates and the work release programs will be consolidated into one building with the transition.

“The transition is going really well,” Division Director Dexter Wells said. “Part of this (correctional institute) building will be used for the public defender’s office, and then the old work release building is actually going to be utilized by the (County) Extension Service. It has a big place in the back where they can actually have programs that they need to have. Then we’ll keep this building up like we normally do and then if the jail ever needs to expand, they can expand it to be upstairs here, so we have that capability without having to build an (additional) building.”

Besides repurposing the building, the county was also able to shift employees from the correctional institute around to different departments and into other jobs outside the county.  Eleven of the 68 laid off employees will be putting in their final punch on their time cards on Friday when the correctional institute will officially close. The number of lay-offs was originally expected to be 73, but that number reflected the number of positions in the entire facility at the time of the closure decision, not the actual number of employees.

“The good news is between us and the state and all of the (employees from the correctional institute) have got jobs except for 11,” Tentler said.

Only one employee took the county up on its offer for early retirement, and the employees who were unable to find work will receive a severance package based on how long they have been with the department. Overall though, county staff were pleased with how many employees were able to find jobs, especially in closely related fields like the sheriff’s work detail.

“That has always been our focus from day one,” Wells said. “We had numerous job fairs, and we were able to place the majority of the employees. It is getting used to doing work a different way, and once we get through that transition I think that the citizens and the employees are going to be happier. With the sheriff opening his work detail program, we are still going to be able to pick up paper on the side of the road and that sort of thing, and we are actually looking at expanding the hours of the convenience centers. It is just doing things different from what we’ve always done.”

The closure of Troup County’s Correctional Institute is part of an apparent shift from state inmates in county correctional institutes to state correctional institutes. The Georgia Department of Corrections at last count was contracting with 23 out of the 159 counties in Georgia for use of county prisons, but the Troup County Prison and the Thomas County Prison are both expected to close this year, which will decrease that number to 21.

“(The state) had not gone up on the per diem (payment for housing state inmates) since ’98, and they were giving us $20 a day, and the cost was $35 and it just becomes a balancing act,” Wells said. “It just didn’t make that much sense.”

Cruising for Christ back after hiatus

Every time Levern Davis parked his 1955 Ford Fairlane, someone would come along and strike up a conversation. Davis saw... read more