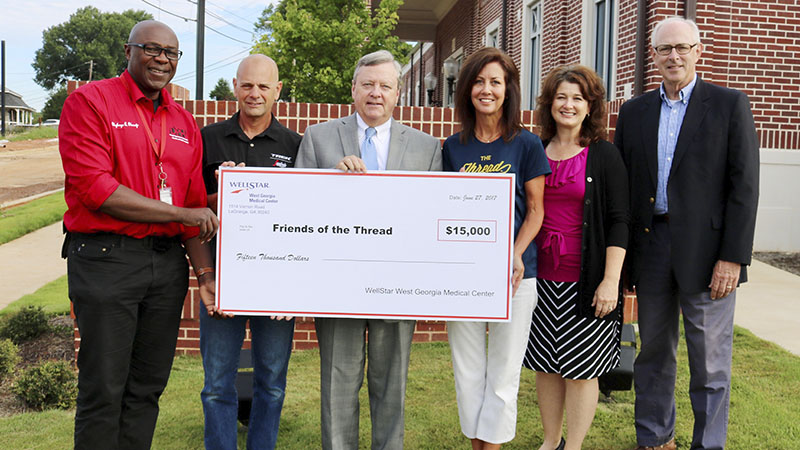 Jerry Fulks, third from left, president of WellStar West Georgia Medical Center, presented a check on Tuesday, June 27, to board members of Friends of The Thread to support their efforts in increasing the health and wellness of the community. Shown with him are Dr. Olugbenga Obasanjo, director of District 4 Public Health and assessments chairman for The Thread; Rick Brock; Natalie Hale, Friends of the Thread executive director; Susan Bowie; and Scott Landa. --Contributed

Representatives from WellStar West Georgia Medical Center were on hand at the District 4 Public Health Center in LaGrange on Tuesday to present a $15,000 donation to the Friends of The Thread organization. The donation will allow the organization to fund an initial Health Impact Assessment relating to the area surrounding The Thread, the 29-mile multipurpose trail currently under construction around Granger Park.

“We agree with the goal of physical exercise for our community because it is consistent with our hospital’s focus of improving the health and wellness of our entire population,” Jerry Fulks, president of WellStar West Georgia Medical Center said via email. “The Thread is a long-term project for our community, and we believe supporting it further in the future, both by financially as well as with in-kind services, will help further our mission of caring for our own employees, physicians and volunteers, so we can always be prepared to care for our fellow citizens.”

The funding from WellStar will allow for a baseline health assessment of the area that will surround The Thread, and Friends of The Thread is still determining the details of the process and partnership between Georgia Health Policy Center, University of West Georgia and LaGrange College to conduct the Health Impact Assessment.

“We’re going to put a trail system in, but we want to look at the health of the people surrounding the trail system, baseline, before it is put in,” said Judy Freeman, member of the Board of Directors. “What WellStar has given us is the funding to be able to do that baseline health assessment.”

The Friends of The Thread is a registered 501(c)3 organization, and was formed in August of 2016 to come alongside city and county leaders in implementing the plan to create The Thread.

Dr. Olugbenga Obasanjo, the District Health Director for Georgia’s District 4, is a member of the Friends of The Thread board, and is serving as the assessments chairman for The Thread as well. Obasanjo first heard about The Thread when he was in Germany on a tour of active duty with the U.S. Army as a Preventative Medicine Officer.

“I was deployed in Germany in December of 2015,” Obasanjo said. “I spent a lot of time keeping an eye locally in LaGrange. I saw a write-up in the paper about The Thread when I was in Germany. I was like, ‘Hey, there is actually a health benefit as well to having trails.’ I was in full support.”

As a physician and Director of Public Health for 12 counties in Georgia, Obansajo is uniquely suited to talk both about the economic and health impacts related to a project such as The Thread.

“I’ll look at it from two ends,” Obasanjo said. “Let’s look at it as if you’re a company from another country who wants to move to Georgia for business reasons. You’ve looked at two or three communities in Georgia, now you need to make a business decision to determine where to go. One of the factors there is looking at resources for your staff. Things like trails bring quality of life issues up.

The first phase of The Thread Project, is set to be complete by July 22, with a ribbon-cutting set for that morning.