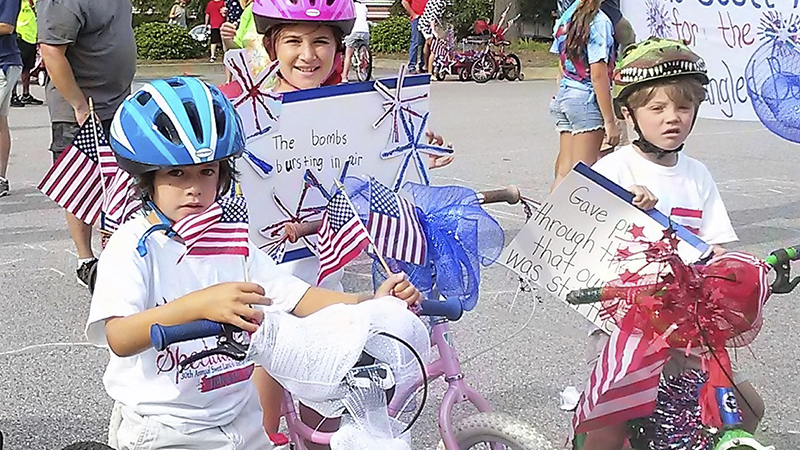 Millan and Belle Solomon thanked Francis Scott Key for the Star Spangled Banner in the 2016 Sweet Land of Liberty parade. They are the third generation of their family to take part in the parade. --Contributed

What’s more common than ants at a Fourth of July picnic?

Sweet memories of LaGrange’s Sweet Land of Liberty parade, that’s what, say local “proud Americans” who have made the parade a family tradition.

Now in its 33rd year, the youth parade has reached its third generation. The young women who helped founders Annette and Jim Boyd stage the first parades are now grandmothers and, in many cases, still involved with the parade. Their children and grandchildren have made the patriotic march down Church Street, garbed as mini Statues of Liberty, military heroes, kazoo band members and even a couch potato.

“The parade has always been a family tradition, rain or shine,” said Anita Holle, who has never missed a parade. “In the beginning, the parade lady, Annette Boyd, would go into the schools with her patriotic attire to encourage the children to participate. Our children would come home talking about it, and when the theme was announced we would start coming up with an idea for our float.”

Holle’s daughter, Anna Holle Knight, marched in many parades, along with her brothers, and has continued the tradition with her own children.

“We get into it and enjoy it,” she said. “My children look forward to it, and they don’t miss out on anything.  You can do the parade and still do the lake.”

The Olivers and Solomons are two more local families whose close ties to the parade span generations.

Gayle Oliver helped the Boyds with the early parades, even hand-making the first bunting for Lafayette Square. She later chaired the parade committee.

“We lived with the parade year-round because that bunting was hanging in my sister’s closet,” said Oliver’s daughter,  Maria Oliver Solomon, laughing at the memory. Solomon marched in the parades of her childhood then — like mother, like daughter — also became parade chairwoman.

“It was quite a different experience to be in charge of something you had participated in as a child,” she said. “I gained a whole new level of appreciation for those who have led the parade.”

Her husband, Brandon Solomon, also grew up participating in the parade, and his mother, Judy Solomon, another parade volunteer, recalls a moment of panic when rains poured on July 4 one year.

“I was treasurer and was ready to write checks for the parade winners. The judges’ list of winners got soaking wet, and the ink smeared.  We couldn’t read the names.”

The current generation of Solomon children, Belle and Millan, are already parade veteran and will be marching again this year.

Belle will be part of an LSPA entry, and Millan will march with his Cub Scout pack, same as his father did years ago. Both attended Camp Cowpie, the Cub Scout Day Camp hosted for almost 40 years by parade grand marshal Martha Evans.

“It’s really special to me that my son and grandson get to honor Martha through the parade after both shared in the experience of Camp Cowpie,” Judy Solomon said.

“She has been such a wonderful example to our community.”

This year’s parade theme, “Faith, Family and Freedom,” really captures what the parade has been about since its beginning, Maria Solomon said. It’s a chance to both “show and tell” the meaning of citizenship, the blessings of freedom and the ideals of patriotism.

“Our parents made it a point for us to participate in the parade, and we wanted to pass that on to our children so they will understand why we have the Fourth of July and why it is important,” she said.

And while the parade has a serious purpose, it’s also a lively, fun family event, she stresses.

“It just gets your Fourth of July off to a great start,” Solomon said. “It gets you in the spirit of the holiday, much like a program of carols can get you in the Christmas spirit. You feel good that you did it, and the feeling lasts through the holiday.”

“I love the excitement of the parade. You feel the support from the community as you march. The streets are lined and the square is packed. You can feel all the patriotism in the crowd,” she said.

In addition to honoring America and establishing a family tradition, longtime parade-goers say the best part is the memories.

Emily Joseph cherishes a photo of  her four, now-grown children dressed up for a “Boston Tea Party” entry in the very first parade. Another time they used cardboard to make “tanks, warplanes and cannons” for a parade saluting the military..

Anita Holle’s favorite memory came when the parade theme was “All American Celebrations.”

“Our children did ‘Take Me Out to the Ball Game,’ and dressed up as a baseball player, a bag of peanuts and Crackerjacks. They used poster board to make a baseball stadium that they pulled in a wagon and took a lot of time drawing all the fans in the stadium on the poster board. They won a prize that year.  It would make me so proud seeing the children get excited, creating their float to celebrate the Fourth. I can’t remember missing a parade.”

But whether it’s your 33rd parade or your first, the parade enthusiasts say the important thing is to be there this year.

“It’s a perfect way to support something good for your community and your family, to have fun doing it and to make some lifelong memories,” Maria Solomon said.

How to take part:

Participation in the Sweet Land of Liberty parade is free and open to anyone 19 or younger.  Registration forms are available at the Mike Daniel Recreation Center on Lafayette Parkway or online at www.jsloflagrange.com.

The parade program honoring grand marshal Martha Evans and youth award winners begins at 9:30 on Lafayette Square, followed by the parade at 10.

Marchers should assemble at 9 a.m. for judging outside  Sweetland Amphitheater at Boyd Park.