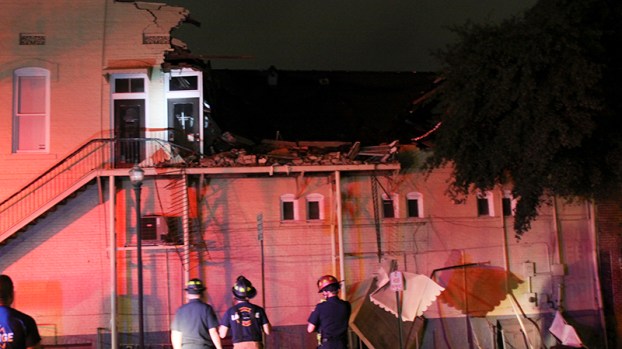 Part of building collapses in downtown

LaGRANGE – Just after 10 p.m. on Friday night, the LaGrange Police Department responded to a call reporting that there was brick in the roadway on Ridley Ave. across from the Government Center.

First responders found that part of the second floor of 10 North LaFayette Square, over TWFG Insurance, had collapsed. Officers on the scene could not say with certainty what had caused the collapse, but did note that the building — which is believed to be over 100 hundred years old — could have fallen victim to water damage.

Ridley Avenue was blocked off in order to keep anyone from accidentally running over the bricks and other debris that lay in the roadway while a crew was called in to clear the debris and ensure that more of the building would not fall into the roadway overnight.

Chris Taylor, public information officer with the LaGrange Fire Department, said the fire department responded to a report of a vehicle hitting the building, but when they arrived they realized the building had collapsed and had not been hit by a vehicle.

City officials assessed the damage and deemed the building unsafe for any occupants to enter the building, Taylor said.

First responders are urging anyone shooting their own fireworks to be extra careful during the Fourth of July holiday. Certain... read more