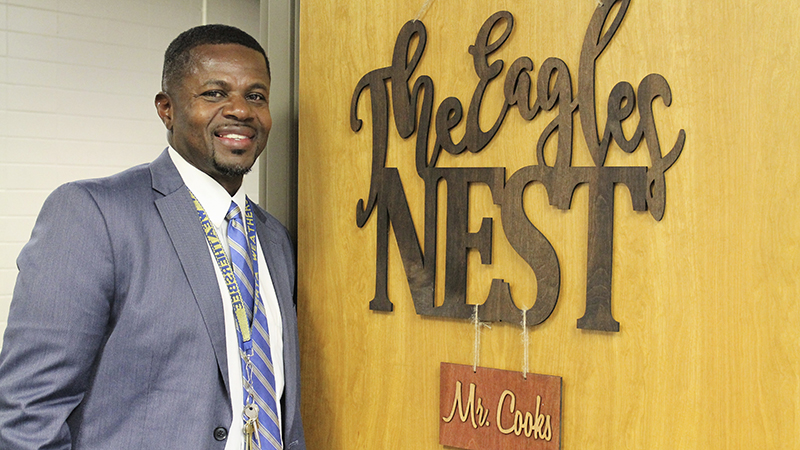 Willie Cooks is not a stranger to hard work, self-motivation, positive redirection, or education. Even before retiring as a Sergeant First Class from the 11th Infantry Division in Fort Benning, he was preparing to teach elementary students at a private Christian school. Now, he will lead the charge at Berta Weathersbee Elementary in Troup County.

As an active duty infantryman, Cooks served most of his military career in the Pacific — Alaska, Hawaii, and Korea — but he returned to his basic training post, Fort Benning, for retirement. He says, “In 1995, I became a drill sergeant and I was later promoted to train drill sergeants. That helped me transition into the classroom. Some people say they have a calling on their life, and I feel my gift is teaching and establishing relationships. You can take those skills anywhere, but it really works wonders in the classroom and education as a whole.”

The recreational fisherman is looking to employ those skills before the doors of Berta Weathersbee open in August as he continues meeting and hiring new staff members. The former third grade educator wants to establish solid relationships and ensure they know the school administration supports their teaching and classroom management efforts.

Before coming to Berta, Cooks held a variety of positions within public school education. After teaching special education in Talbot County, he transitioned to Woodall Psychoeducational Center in Muscogee County. Later, he was promoted to assistant principal where he worked for two different schools at the same time. Cooks’ observes the student populations at most of his previous schools are very similar to Berta Weathersbee.

“The demographics are practically the same and I expect the challenges are probably the same. The difference between my previous position and now is that I had two different staffs from two different schools to work with. It was a little over 1,000 students total. Now, I am at one location with less than 500 students,” he said.

While he feels there are some differences and similarities in preparing adults for the battlefield and preparing children for academic success in the classroom, the former drill sergeant said, “You are teaching somebody something they don’t know. They all have a listening ear. You have to know how to make it relevant to them and keep them engaged in learning. You have to pique the interest of both the adult student and child student, and you have to make it relevant to their life and future.”

Over the years, he has seen the demand for curriculum move at a faster pace, which he recognizes as a positive. “Unlike 12 years ago, I can now walk into a kindergarten classroom and the students are being introduced to geometric shapes … that’s geometry and they are learning it earlier than when I started teaching third grade. That’s a big jump from what was done in the past.”

He also notes helping children think critically is a key indicator because they have to provide written assessments and feedback on state tests like Georgia Milestones. But it’s not only up to the students and teachers to prepare the students of Berta for success, Cook said.

“Parental involvement is key to having a well-rounded child inside and outside of the classroom,” Cook said.

He says, “Parents are welcome here. Right now we have a front partition, but it is not impenetrable. Parental involvement is paramount to having successful students so we need their help in staying involved throughout the entire year, not just the beginning or when report cards are handed out. We need them to be an active participant all school year.”

On the first day of school you may see Cooks introducing himself to the student body, but his main concern is to make sure everyone makes it through the first day and arrives home safely.

“I want them to know who I am, but the successful part is ensuring the students want to come back to school the next day,” he said.

When he goes home for the day, he looks to spend time, and make travel memories, with his wife Pashion, a kindergarten teacher, and his son Elijah. He also has a son, Dv’nn who plays football for Newberry College in South Carolina.

“My wife can keep me grounded,” he said. “As an administrator you don’t want to lose touch, and she is the one who can pull my coat tail and be a teacher’s advocate when need be.”

After spending close to ten years in Muscogee County classrooms and front offices, Cooks is excited about spreading his wings here in Troup County School System at Berta Weathersbee Elementary. He even sold his landscaping business to devote his time and energy to making an impact at the storied elementary school.

In his office hails a photo of Buffalo Soldiers, the first peacetime all-black regiments in the regular U.S. Army during the Indian Wars, and later, Civil War. He hangs it as a memory to their legacy of respect and overcoming challenges during dark times.

“I’m excited about the challenges and the new family we will have here at Berta. We are going to work through everything together,” Cooks said. “I look forward to letting the community know and see that Berta can do it — that Berta’s Best will put their best foot forward.”