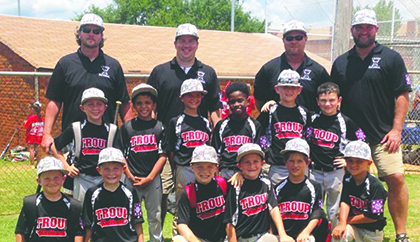 COCHRAN – It was a successful summer.

The Troup County National 7-8-year-old all-stars finished their summer season by going 3-1 in the Dixie Youth Baseball state tournament over the weekend.

After making it through the district tournament in Thomaston, Troup County headed off to the state tournament and came within one victory of winning its pool.

The pool winners will return to Cochran this weekend to determine a state champion.

Jones County edged out Troup County to win the pool and move on to the final four.

Troup’s lone loss in pool play came to Jones County, but coach Edward Kelly made sure to let the players know the significance of what they accomplished.

“If you think about it, there were 16 teams playing this weekend, and there were at least that many that didn’t make it that far,” Kelly said. “To be a part of the 16 that got to play is a huge deal.”

At state, Troup County showed it could compete with anyone on that level.

“Being 3-1, it’s definitely in the top half, and probably fifth or sixth place,” Kelly said. “So we didn’t miss (qualifying) by much.”

The all-star players were selected from the various teams in the Troup County Parks and Recreation Commission spring league.

Kelly said it didn’t take long for everyone to come together and form a cohesive unit.

“It’s been really good,” he said. “Some of them had played together throughout the regular season, and some of them had played against each other. To take 12 boys from four or five different teams and combine to make them one, it was fun to watch to watch them get to know each other. The last day, if you’d been an outsider looking, you’d have never known they hadn’t been playing together. Watching them together, horse-playing in the pool, all of that stuff throughout the weekend was quite fun.”

Kelly said the fan support for the team was tremendous from the district tournament in Thomaston to the state tournament in Cochran.

“Thomaston wasn’t that far of a drive for our district and I was wondering how many folks would be able to commit the time and travel to Cochran and stay,” Kelly said. “And we had a great crowd. A lot of parents, a lot of siblings there watching their brothers play, and grandparents. It was a nice big crowd from Troup County.”

COACHES: The head coach is Edward Kelly, and the assistant coaches are Brent Bailey, Nick Burns and Jeremy Cockrell.