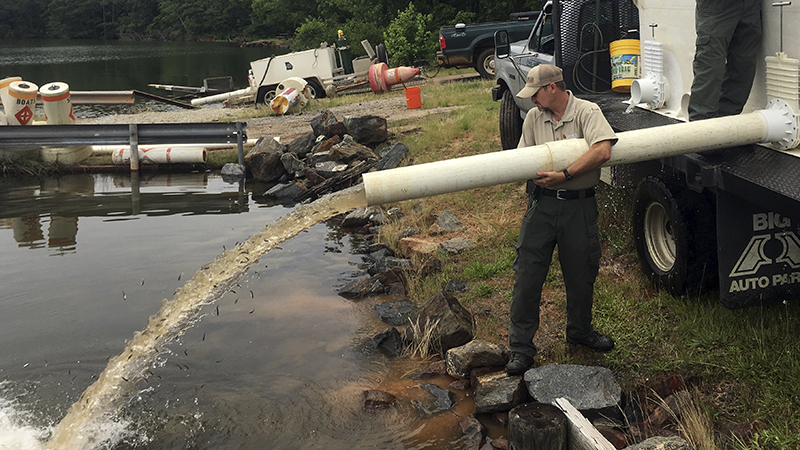 West Point Lake has been restocked with largemouth bass. --Contributed

Largemouth bass may soon be easier to catch thanks to recent restocking efforts at the lake.

Almost 610,000 new largemouth bass fingerlings were recently introduced to West Point Lake as part of a stocking effort by the Georgia Department of Natural Resources’ Wildlife Resources Division. This is the second year of a five-year effort to restore the levels of largemouth bass to the lake, so it is too early to say what the full long-term impact of the effort will be. However, with fishing tournaments taking place on the lake regularly, in the very least it should make some fishermen very happy.

“In the future, we hope that these stocked largemouth bass fingerlings will lead to an increase in the abundance of quality-size largemouth bass on West Point,” fisheries biologist Brent Hess said. “In addition, we would like to see the largemouth bass once again comprise a larger proportion of the black bass population in the lake.”

About 20 percent of those 610,000 largemouth bass fingerlings are expected to reach maturity, but that number should be enough to accomplish the division’s larger goal of increasing the number of bass in the lake. According to Hess, spotted bass have thrived in the lake because of the high levels of phosphorus that has flowed downstream from Atlanta,  resulting in murkier water. However, recently conditions have become more favorable for largemouth bass, which he says are a fisherman favorite.

“It used to be 100 percent largemouth, and it has slowly changed to now we are close to 60 or 70 percent spotted bass ratio to largemouth bass, so anything we can do to bring that back (is good),” Hess said. “Spotted (bass) aren’t native either, so it’s not like we were discriminating against a native species.”

Largemouth bass are a common native bass species found throughout Georgia’s lakes, ponds and rivers. Anglers in the state spend more days fishing for bass than any other freshwater species.  While largemouth bass are normally found in West Point Lake, a decrease in water quality and the introduction of the non-native spotted bass has caused a shift in the black bass population.

“It used to be like a big farm pond that you would see out in the field, but now it is not as green and you can see a little deeper with clear water,” Hess said. “That tends to be a little more advantageous to the spotted bass then the largemouth bass, so if we can get a little bit bigger fish in there and eat more of those spots (that would be good). Plus, we are also trying to stock them at a bigger size when we put them in so that when the spots spawn and have their fry, the large mouth — the theory is that the large mouth will be a little bigger and can use them as prey and keep their numbers down that way.”

The local branch of the Chattahoochee Riverkeepers does not expect the introduction of the largemouth bass to have any negative effects on the lake or other wildlife.

“It will not affect the quality of the water,” Watershed Protection Expert Hannah Bradford said. “It may feed a couple of the fish.”

The fish stocked in West Point were produced this spring in Wildlife Resource Division hatcheries from top quality brood. Fisheries staff will monitor the largemouth bass population as they grow to adult size using markings placed on the fish and genetic testing later on.

For more information about fishing on West Point, visit http://georgiawildlife.com/fishing-prospects.

For further information or questions about this study, contact Hess at the fisheries management office in West Point, GA at (706) 845-4180.