Callaway player gets offer from Oregon 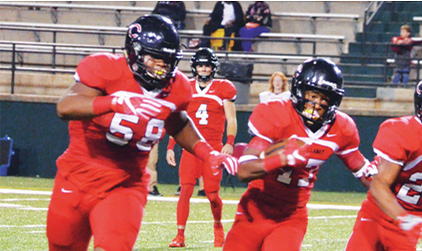 HOGANSVILLE – That’s another Oregon offer for the Callaway Cavaliers.

The Oregon football program has shown intense interest in Callaway High’s players, as evidenced by three offers it has extended to the Cavaliers.

The latest Callaway player to receive an offer from Oregon is Jacob Freeman, who will be a sophomore on the team this fall.

Other Callaway players who have secured offers from Oregon are sophomore Cartavious Bigsby, and junior Keiondre Jones.

Freeman, the brother of two college-football players, received significant playing time as a freshman during the memorable 2016 season where the Cavaliers went 13-1 and reached the semifinals of the Class AA state playoffs.

Jacob Freeman’s brother KeShun Freeman is a senior at Georgia Tech, and he is preparing for his fourth season as a starting defensive lineman for the Yellow Jackets.

Another one of Jacob Freeman’s brothers, Michael Freeman, is heading into his freshman season at Mercer where he’ll be a linebacker.

Jacob Freeman is a versatile player for the Cavaliers, and he’s a quarterback, wide receiver, running back, kick returner, and defensive back.

Jones, an offensive lineman who is one of the state’s most heavily recruited players, received his offer from Oregon earlier this year, as did Bigsby, a running back who scored a touchdown in the spring game against Troup.

It was moms vs. daughters