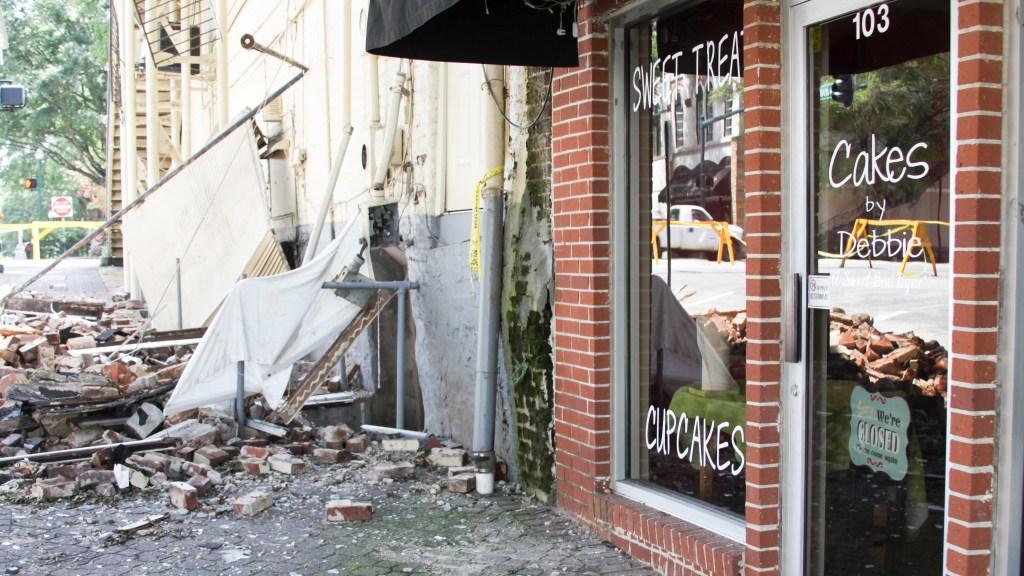 On Wednesday, debris still covered the sidewalk beside local businesses, near where the second floor of 10 North LaFayette Square collapsed. (Photo by Alicia B. Hill | LaGrange Daily News)

The holiday weekend has slowed the process of finding out what caused a building on LaFayette Square to partially collapse, but affected businesses have started reopening their doors and serving customers again.

Parts of the building, located at 10 North LaFayette Square, collapsed on Friday night after 10 p.m. The LaGrange Fire Department original responded to a call that someone had hit the building with a car, only to find out that wasn’t the case.

The owner of the building and nearby businesses were especially shaken by the collapse, which did not injure anyone, but could have easily had a very different outcome if it had happened at another time.

“It is horrifying,” owner Jane Davis said. “It really is sad to me because I can remember it as a little girl. They had an ice cream parlor up there, and so I remember it well.”

The building has been in Davis’ family for over a hundred years, and the upstairs portion of the building has served a variety of purposes over the years, including a drug store. Davis stated that she was not aware of any problems with the building prior to the collapse of the second floor on Friday, but she believed that the most likely causes were a combination of age and rain damage.

“At least it happened when it did because if it had happened during the middle of the day it would have destroyed cars and possibly even killed somebody because they walk up and down that walkway,” said Debbie Barronton, the owner of Cakes by Debbie.

Cakes by Debbie’s LaGrange location has remained closed since the collapse due to the danger of falling debris, but the bakery has worked with customers to minimize the inconvenience caused by the unexpected closure. The bakery hopes to reopen its doors as soon the owner is confident that she can do so safely. TWFG insurance, which was located on the first floor of the building, was able to relocate its office Wednesday to one building over.

“My biggest concern was, I need to get back open so that I can service my customers, and so that way I can continue to pay my employees,” said Jimmy Goodwin, the branch owner of TWFG Insurance Services. “That was the biggest thing on my mind.”

The definite cause of the collapse will not be known until a building inspector has reviewed the site — a process that has been delayed due to the holiday weekend — but officials agree that age and weather are the most likely culprits behind the collapse.

“We feel like it is probably a combination of age and the saturation from the rain event that we’ve been having may have been contributing factors,” said city director Alton West.

According to West, the city will recommend that the owner acquire an engineer’s report on the building in order to determine the best course of action for the site. He further stated that it may be wise for other property owners on the square to get engineer’s reports on their buildings as well.

“When I was on site Saturday morning, one of the things that I and my inspector talked about was that we might want to encourage the owners of the local buildings down there (on the square) to get an engineer’s report just to get some assurance as to the stability of them because we have had a number of rain events,” West said. “I think it would be beneficial and helpful to the building owners just to have that assurance that their locations are stern with the engineer’s report to make sure that something couldn’t go wrong.”

West also referenced previous structural problems caused by water damage in downtown — such as the mural beside the chamber that had to be taken down in December out of concern that it could fall and injure someone.

Cakes by Debbie is still taking orders at 404-597-3941, and plans to work with LaGrange customers on order pickups until the store is able to safely reopen.

Hundreds of children dress up for annual parade