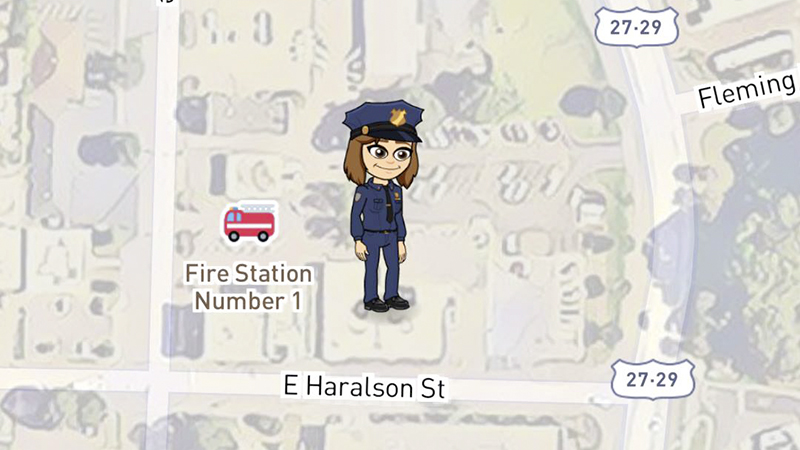 Parents are being warned about a new Snapchat feature that shows a person's location. --Contributed

The LaGrange Police Department recently released a warning to local parents about a new location-sharing feature on the smart phone app Snapchat. According to LPD Detective Amy Sweatt, the feature allows Snapchat users to share their location with other users.

Depending on the settings, the feature can share a user’s exact location with those on the user’s friends list or with all Snapchat users who have the feature enabled.

Sweatt said a location-sharing feature like this one poses a danger to children and teenagers who use the app, because it can share their location with predators and people who wish to harm them.

“The problem is that kids will accept anybody and everybody who wants to connect with them on social media,” Sweatt said. “It’s all about how many followers or friends they have on social media.”

When she enabled the feature on her account, Sweatt said she was able to track the locations of several people she knew personally.

“If someone sought to do me any harm, they could easily come right to me,” Sweatt added.

Sweatt encouraged parents to monitor their child’s social media use and ensure that the feature is not enabled on their child’s Snapchat account.

“There is no reason to have your kids’ location be advertised,” Sweatt said. “Anybody dealing with social media needs to educate themselves. Anytime anyone is using any social media, be careful about the information you’re sharing and allowing that app to have access to.”

After the feature was first introduced, Snapchat gave users the option to enable it. If the feature has already been enabled, users can choose to hide their location under “ghost mode” in the app’s settings.

The LPD has never covered a case that involved social media. However, Sweatt said she has noticed an increase in social media related crime this year.

“We’ve recently had robberies related to people who are trying to make transactions over Facebook or over online sale websites,” Sweatt said. “We’ve had people meet up to sell something and then get robbed.”

Sweatt said it is better for the LPD to be proactive and inform the community ahead of time instead of waiting for a Snapchat-related incident to occur.

“This is something new that has come out,” Sweatt said. “We thought it was important to go ahead and make folks aware of it. This is forward thinking.”