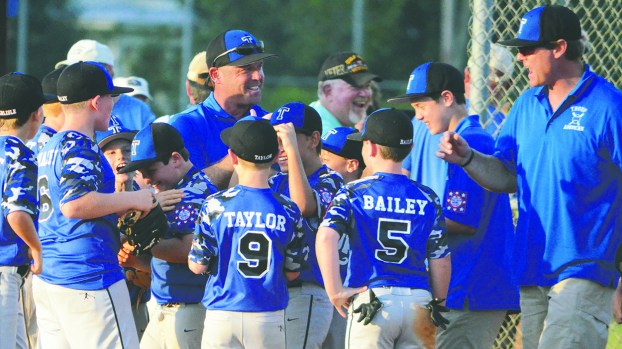 It’s a 12-team tournament, and the participants will be divided into three four-team pools.

The three pool winners, in addition to one at-large team, will advance to the final four next weekend in Eatonton.

The winner of the state tournament will qualify for the Dixie Youth Baseball World Series next month in Oxford, Ala.

Troup American earned its spot at state by winning the District 1 tournament with a 5-0 record.

In the championship game on July 27, Troup American rallied from a seven-run deficit to beat Thomaston 13-11.

A little more than a week later, the Troup American players will be back on the field as they look to build on the success they had at district.

In some age groups, the gap between the district and state tournaments is two weeks or more, and Troup American head coach Rusty Taylor is glad his team doesn’t have to wait that long.

“I like the way ours is,” Taylor said on Thursday afternoon as his players went through a light workout at the Harris Baseball Complex. “I think they’d get burned out on a bunch of practices. I’d rather just go play. We’re excited about it.”

Troup American will be a part of a four-team pool along with Putnam County, Baconton and Columbia County.

Troup American will play Columbia County today at 6 p.m. in its state opener.

After facing Putnam County at 9 a.m., Troup American will play Baconton at 4 p.m.

If Troup American wins its pool, it would move on to the final four.

If Troup American doesn’t win its pool but only has one loss, it would play on Sunday for the right to earn the fourth and final spot in the semifinals.

In the final game against Thomaston, Troup American was down 11-4, but it charged back to take the 13-11 win.

Next week, two other Troup County all-star baseball teams will head to their state tournaments.

The Troup National 11-12-year-old all-star team, which won its district tournament at the Harris Baseball Complex, will be in Crawford County for the state tournament that gets under way on July 14.

The Troup County 13-14-year-old all-star team, which didn’t have a district tournament, will begin play in the Dixie Boys Baseball on July 13 in Putnam County.

The team was at the Harris Baseball Complex on Thursday to play Opelika in a pair of scrimmage games.

Troup County won both of the games handily.

By Kevin Eckleberry kevin.eckleberry@lagrangenews.com LAGRANGE – It was no contest. In recent months, the Troup Baseball 12-and-under travel team has... read more