Community pours in on Market Day 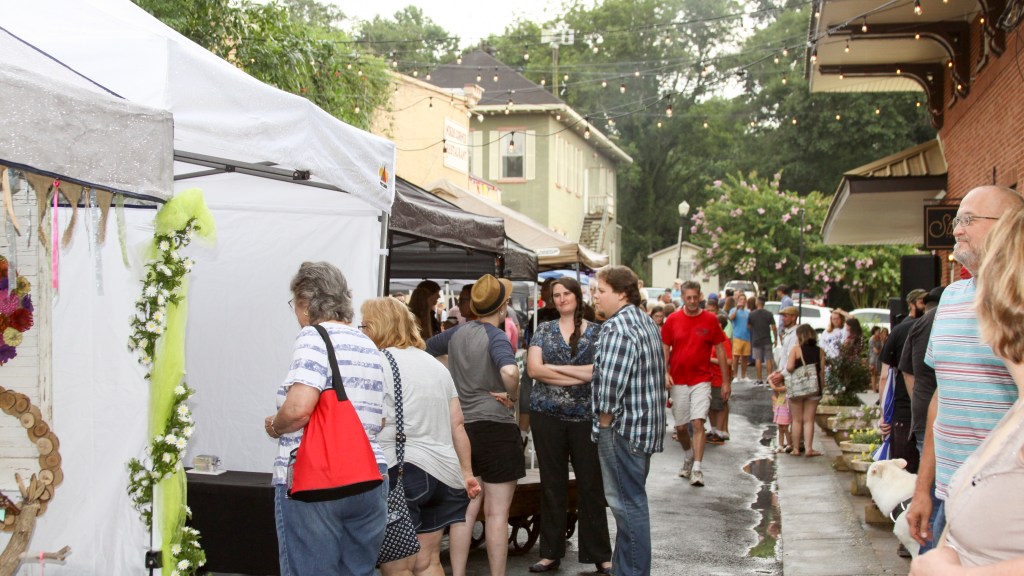 The market area beside the Hogansville Train Depot quickly filled as the weather cleared on Saturday. (Photo by Alicia B. Hill | LaGrange Daily News)

HOGANSVILLE – A sudden shower just as Market Day Under the Lights kicked off on Saturday did little to discourage the curious crowd who wondered from tent to tent on the road beside the Hogansville Train Depot.

The rain also failed to scare off the guitarist on stage, who merely scooted further under the awning of Station Coffeehouse and continued to play. By the time the weather cleared, close to a hundred people were scattered up and down the little street and inside the depot – a surprising number for the little town of Hogansville, but perhaps less so considering the city’s tradition as the host of the regionally-renowned Hummingbird Festival.

“It is really great because the one thing that we really like about coming here – because we’ve come from the very first one – is we can experiment with new scents, so we know whether or not we want to offer it online,” said Joy Davis of Davis Candle Company. “We use the feedback of people coming here to expand, and it is just nice talking about the products face to face with people.”

“We have signs that are from all kind of repurposed things,” said Adrienne Hand of Two Loving Hands. “(I have) this one which was actually made from a privacy fence that one of my friends remodeled from a house in Hogansville, and I begged the fence off of him. (I also have) this that is actually tin off of an old storage building at Fort Benning. Everything is repurposed.”

Even vendors that weren’t from Hogansville came because of their connections to the little city, whose peaceful atmosphere has drawn in more than a few transplants.

“My sister and brother-in-law are actually really involved with reviving the city, and they are a big part in this,” said Bethany Camp of the vendor Woven Camp. “So, they told us about it, and I’ve been doing a lot of my crafting for a while, and so I talked to them and decided that it would be a good idea to come out and try it.”

Camp and her husband drove down from Peachtree City for the event, and she was excited to be in the little city that she might have never known about if her sister hadn’t moved into it.

“We are enjoying it,” Camp said. “It is awesome, and everybody should check it out.”

Market Day Under the Lights takes place on the second Saturday of every month in downtown Hogansville. This was the event’s third month since its inception.

No tax free weekend this year