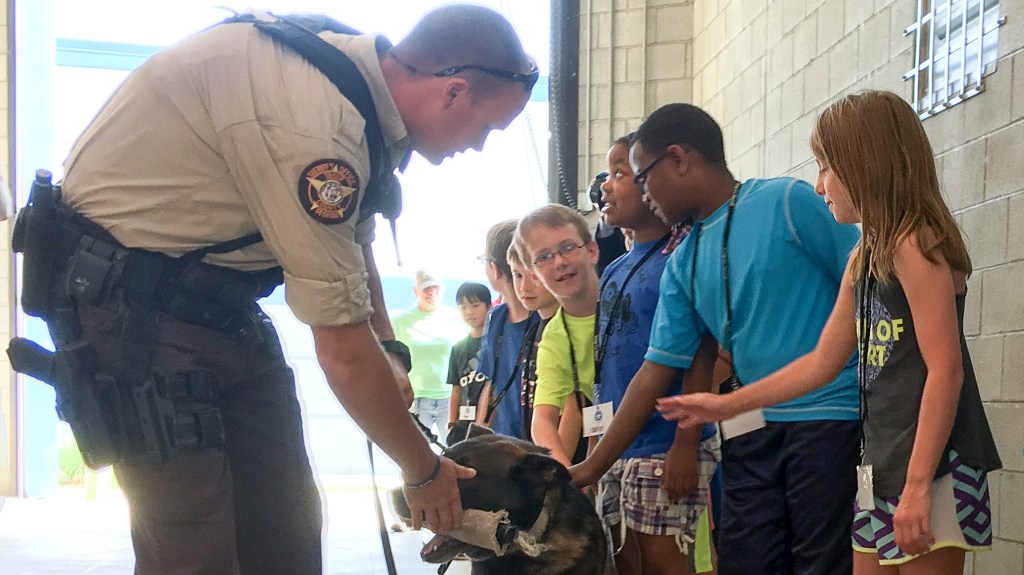 Deputy Matt Mayfield introduces his K-9 Jack to local children during the Sheriff’s Academy for Youth camp on Monday. The annual camp aims to foster better relationships with the community and inform local children about safety. (By Alicia B. Hill | LaGrange Daily News)

Local children watched in rapt attention on Monday, as Jack the German Shepherd showed off his ability to find things like ammunition.

The Annual Sheriff’s Academy for Youth camp started Monday with a demonstration of the Troup County Sheriff’s Department’s K-9 unit, which is used to find both people and dangerous items.

“Tracking is when somebody runs off in the woods or someone gets lost in the woods, and the dog uses his nose – or her nose – to find the bad guy or find you,” Deputy Matt Mayfield said to the campers. “Dogs can be deployed to find the bad guy. Dogs can be deployed to find a lost child. A lot of the times we use our dogs to find a young child who has gotten away from their mama and daddy at home and has walked off into the woods. We deploy our dogs, and our dog finds him.”

Mayfield partners with Jack, who is eight years old and lives with Mayfield. Jack knows how to track people, but he is specifically trained for another job.

“My dog in general is what we call an explosives detection coordinates dog,” Mayfield said. “(He finds) things that explode, or bombs. My dog also tracks. He can find humans if he needs to, but my dog is specifically trained to find explosives. Explosives can be anything from TNT to dynamite to things such as Semtex and things like that. He can also find what we call black powder. Black powder is one of the basic explosives that is used in fireworks. It is used in ammunition for guns.”

The demonstration is only a small part of what the local children will get to learn about during the two, one-week long camps – one for ages 9 to 10 and the second for ages 11 to 12 — which also feature a variety of fun activities, like skating, swimming or a movie. The sheriff’s office enjoys the opportunity to have positive interaction with local children, and it uses the camp as an opportunity to explain not just what the department does, but why the department does what it does.

“Our patrol division, they are the heartbeat of the sheriff’s office,” Sgt. Stewart Smith said. “If somebody calls 911, they are going to go out to the house and find out what is going on. If someone is speeding up and down the road, they are going to stop them, and make them slow down.”

The department is involved in a wide variety of community events, but SAY is special in that it focuses specifically on the sheriff’s department’s role in the community and letting children know what to expect from the department.

“My division basically patrols the county on a daily basis to make sure that you guys – your mothers and fathers and grandparents, everybody, but especially you guys – are safe,” Sgt. Rodney Williams said. “If you call 911, the guys in my division are going to respond to make sure that everything is okay, and to help to assist with solving your problems. If you see something in the neighborhood that doesn’t look right – that looks suspicious – you call 911, and we are going to come.”

The first session of the camp will run through Friday, and the second session will take place next week. This is an annual camp that Sheriff James Woodruff provides in conjunction with the Troup County Parks and Recreation Department.