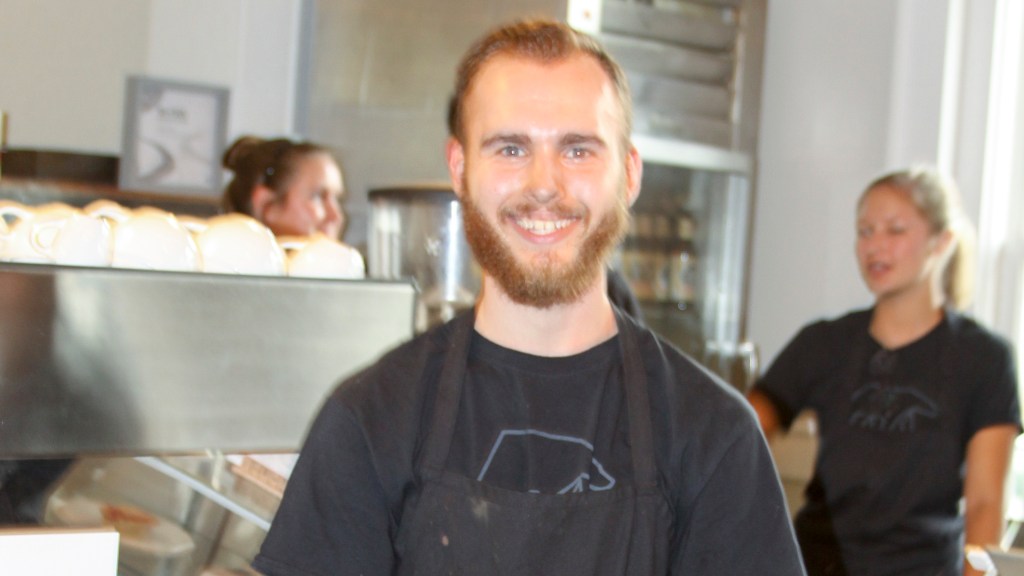 Matt Fleuriet is the manager of Station Coffeehouse in Hogansville. Fleuriet works closely with the Pioneer Project in its efforts to revitalize the city. (Photo by Alicia B. Hill | LaGrange Daily News)

Matt Fleuriet is the man responsible for the creation of the coffeehouse. A native of Newnan, Fleuriet was approached by members of The Pioneer Group in Hogansville to open a coffee shop. The Pioneer Project is a collaborative community dedicated to inspiring the dormant, creating community and exploring new frontiers.

Fleuriet had been living abroad in Sydney, Australia for three years upon his return to Atlanta. While searching for jobs, the opportunity to relocate to Hogansville came about and struck him as unique, and ultimately worth pursuing.

“I moved back (to the US) in December of this past year. I was living in Atlanta, had a couple of job opportunities, Fleuriet said. “I’m good friends with one of the founders of the Pioneer Group who asked me to open up a coffee shop here. I told him I wasn’t sure about Hogansville, but he convinced me to come check it out.”

After making his decision to relocate to Hogansville and help assist in the revitalization of the town, Station Coffeehouse was launched in May of this year, and has been steadily increasing its customer base since that time.

“We opened May 13,” Fleuriet said. “We had our grand opening two months ago and had a huge turnout. We’ve been going strong six days a week since then.”

While the prospect of living in a small town might not have appealed to Fleuriet originally, the opportunity to invest in a community and play a part in its renewal has taken its hold.

“Hogansville is growing on me for sure,” Fleuriet said. “You get to know so many people, all the locals and business owners. Getting to be a part of something new, trying to bring life back and revitalize this town. I like it.

The shop is open on Mondays-Fridays from 7 a.m. to 3 p.m., and open on Saturdays from 8 a.m. to 4 p.m. Station’s sole mission is to serve the community. The coffee shop exists to provide a platform for community events, workshops and gatherings, per the company’s website. Just like the coffeehouses of old, Station strives to create a hub for the surrounding town to gather and fellowship.

More information on Station Coffeehouse, including the company’s menu, can be found at their website. Stationcoffeehouse.com.