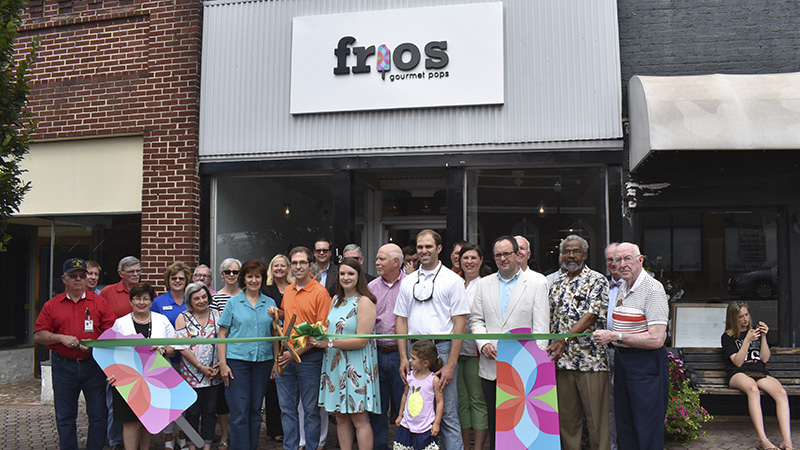 Frios Gourmet Popsicles officially opened in downtown LaGrange on Friday. After discovering Frios on vacation three years ago, Matthew and Lynsay Oleson decided to open their own in town.

Business owner Lynsay Oleson said that while finding the building in town was not hard, one of the challenges of opening the store was the build-out process.

“We were fortunate this building had been vacant for quite some time,” Oleson said. “Unfortunately, the build-out process took longer than we anticipated and longer than we hoped.”

President of the Lagrange-Troup County Chamber of Commerce Page Estes said the chamber is excited about what the new business will bring to the downtown area.

“We’re so excited to have another great business in one our downtowns in Troup County,” Estes said. “It’s also just a great way to bring families to one of our downtown areas with a wonderful, delicious treat.”

Estes said the Olesons business was supported by the chamber because it was well-planned.

“We also love that Matthew and his family have come together to truly do this as a family business, he’s gone through all the right processes, in terms of making sure he had a solid business plan. And this is one of those businesses we’re certain is going to be a great success,” Estes said.

Oleson said opening the popsicle store was her husband’s dream.

“It’s been a dream of his for so long to open a restaurant-type thing, and now he has his own business,” Oleson said.

“I think it’s a neat idea and they’ve worked hard on getting it going,” Summers said. “I wish them a lot of luck.”

Oleson said she was pleased that the store is officially open for the town.

“After so long of waiting for the buildout to take place and then having the cart outside the store, we finally have been able to come inside and we’re just glad to have somewhere for people to come sit down and enjoy their popsicle and be in the cool instead of being in the heat, so it’s just nice all around,” Oleson said.

Estes said the new business is good for the community.

“This is definitely one of those business that we definitely needed in the community and it just shows that people are excited about what’s happening in Troup County,” Estes said. “It’s a good place to do business.”