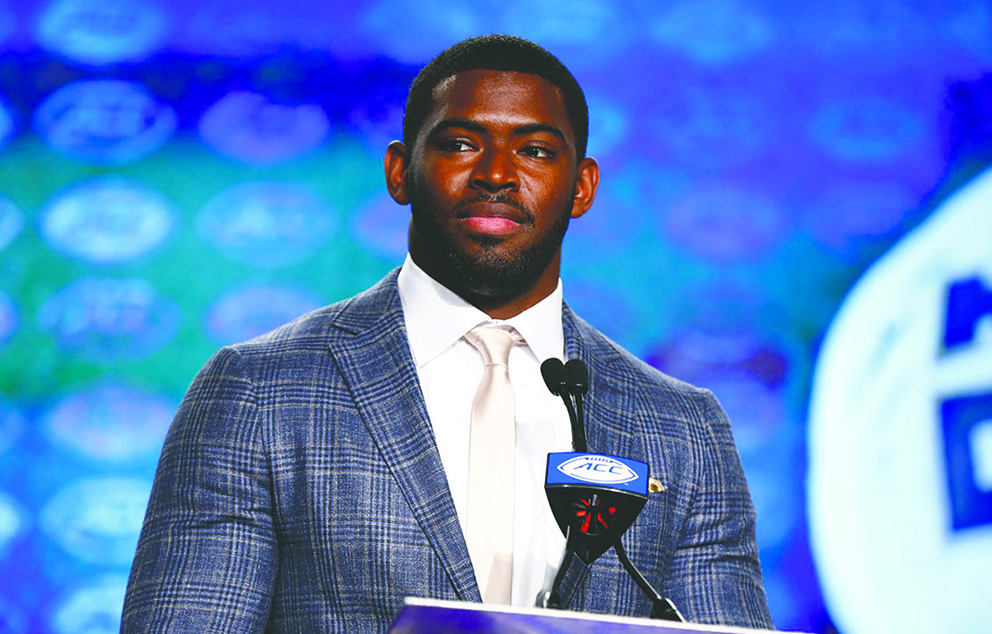 The Georgia Tech Yellow Jackets were riding high heading into the 2015 season.

In 2014, Georgia Tech reached the ACC championship game and capped off an 11-win season with a resounding victory over Dak Prescott and the Mississippi State Bulldogs in the Orange Bowl.

The Yellow Jackets had lofty expectations as they embarked on the 2015 season, but they fell flat and stumbled to a 3-9 record.

A year ago, the Yellow Jackets rediscovered the winning touch and enjoyed a nine-win season that included a road win over Georgia, as well as a victory over Kentucky in the TaxSlayer Bowl.

Now, with a new season on the horizon, the Yellow Jackets are hoping to avoid a repeat of 2015 when they followed up a tremendous season with a disappointing one.

One of the players tasked with making sure the Yellow Jackets keep the wins coming is senior defensive lineman KeShun Freeman, the former Callaway High standout.

On Friday, Freeman was representing Georgia Tech at the ACC Kickoff in Charlotte, N.C.

Freeman said the team’s veterans remember what it was like in 2015 to endure a three-win season, and no one wants to go through that again.

“I think as an older group of people, we played on one of coach Johnson’s worst teams and one of coach Johnson’s best teams, so we use each season as an example of what could have happened, what has happened, and what we can take from those seasons to carry over into the future,” Freeman said during his introductory remarks to reporters on Friday. “So that’s why this off-season we’re kind of excited because we’ve worked so hard. I mean, our coaches really kind of helped us step our game up by challenging us to a new level when we’re running and when we’re in the weight room. Like I said, I’m very excited to go into camp and see who earns positions and who comes out on top, so when we go into the first game we are very happy with what we’re going into it with.”

Freeman added that “my teammates do some really great work in this off-season, whether it be in the weight room, whether it be on the field conditioning. I’m excited to see how we do in camp because we have a lot of stuff that we can add on to last season, so I’m expecting a really great year from everybody.”

Freeman said he will try to do a better job of getting to the quarterback this season.

“Personally I’m trying to do better with pass rushing, trying to be more of a productive player than I have been in the past,” he said.

Freeman has been a productive player since the get-go.

After helping lead Callaway to the final four of the state playoffs in 2013, he enrolled early at Georgia Tech and was able to go through spring practice with the team in 2014.

By his third game as a freshman, Freeman was in the starting lineup, and he was one of the top defensive players on a team that went 11-3.

Freeman started every game in 2015 and 2016, and when this season gets under way on Sept. 4 against Tennessee, he will be in his customary spot on the defensive line.

Freeman and fellow defensive lineman Antonio Simmons will be two of the veteran leaders on the defense.

“Me and him are really close. We’re like brothers,” Freeman said of Simmons. “We prepare all the time with each other. We’ve been going to the (indoor facility) to just really work on hand speed, our feet, just making sure that we’re doing the small things right so we can go into camp and those things will just be really simple and we can help coach the younger guys.”

Freeman remembers what it was like to be one of those “younger guys” on the team, and he is doing his part to help the current freshman adapt to the rigors of college football.

“So right now I’m kind of serving as like a freshman ambassador,” Freeman said. “I’m pretty much showing them this is what you’re getting into, and your journey is not going to be the same as my journey. My journey wasn’t the same as the people that came before me. But in everything you do, make sure that you’re motivated, you’re going hard in every drill. If you’re in the classroom, you’re going hard so you can play on the field, and just making sure that they start off very strong so they can finish stronger.”

Off the field, Freeman has made a major impact as well.

He’s involved in numerous charitable causes, and last year, he was named to the Allstate AFCA Good Works Team.

Freeman was one of just 12 FBS football players in the country to receive that honor.

Just last week, Freeman and some of his fellow Georgia Tech athletes read to students who a part of the school’s Horizons Atlanta summer reading program.

After his college playing days are done, Freeman is hoping to make his way to the NFL, and beyond the football field he wants to become a pediatric anesthesiologist.

For now, Freeman’s main focus is on making the most of his final season as a Yellow Jacket.

“It came faster than I thought. I’m excited about one more season in Bobby Dodd Stadium,” Freeman said. “You reflect on the things you’ve done in the past and put it to the side and focus on what I can do this year. It’s a new chance to make plays. I’m really excited to see what the team does.”